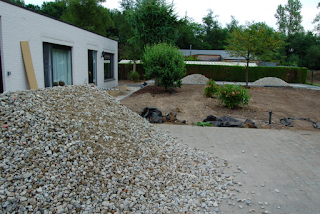 20 tons of concrete rubble 20/40 was dumped on site today.
I took a ride in the truck from the load-in site 'till home to give the driver directions. Dr Livingstone was ahead of us in the van to lay down some rubber matting on the slabs to protect them. Wasn't necessary, the dumpster could move 1 meter out of the truck, so the guy nicely dumped it in two convenient piles on in the petanque area so Dr Livingstone and someone called Simon can spread it out. There's also 10 ton in front of the garage which needs to go around the house.
Don't really know if Dr Livingstone is really up to it, he had extreme pangs of pain shooting up his back, he's going to the physiotherapist tonight to see if he can make him go again.
I can help the odd hour tonight, but I have an exam (actually two) in the morning.
Posted by Mrs B at 09:02 No comments: 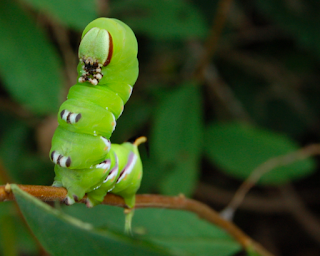 This interesting caterpillar was munching away in the garden yesterday. A bright green fella with purple an white stripes on the side. It's a Sphinx ligustri, soon to be the Privet Hawk Moth.
When it feels threatened, it stands upright like a sphinx, hence the latin name. You can just make out the head and its six upper feeding paws all clutched together.
It feeds on nice smelling plants like lilacs and jasmin. Must get some in when replanting everything.
Posted by Mrs B at 08:34 No comments:

Irony for the sake of science 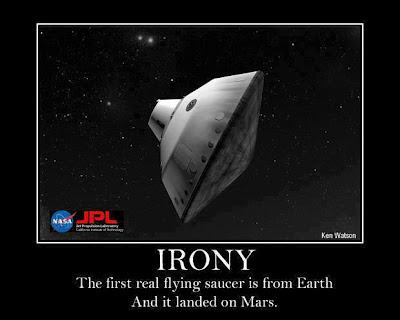 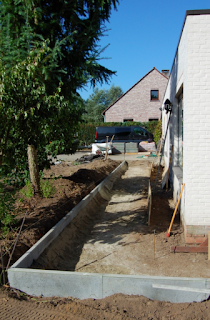 Another team was here on Thursday to put in the borders for the petanque area and the path around the house.
They thought they would have been done within half a day, but they left around 4 pm.
They did do a very nice job, relaxed people, they cleaned up everything very nicely. The eldest one was a bit of a chatterbox but he did know his trade.
Luckily I closed all the windows before they started slicing through the cement borders. What a load of dust!
Good thing the neigbourlady didn't have her washing out to dry. 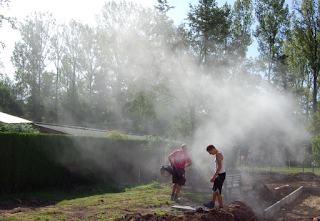 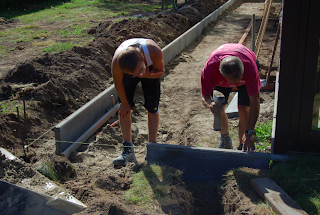 It is a very different view now, it is all slowly taking shape.
Next week, after my exam(s) on Wednesday I'm getting stuck in, ordering more stuff to dump in there.
And we'll have to put the drainage in around the house, that is going to be a different challenge.
We also want a nice little terras to go in next to the petanque area under the cherry tree. It produces a nice speck of shade from late morning until two pm. It's ideal for the pick nick table and lazy summer brunches. 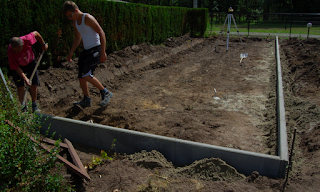 We'll give it a shot ourselves (she said bravely not realising what a cock-up this was going to be in future).
It will probably involve a lot of swearing, sore backs, some refreshing beers and more concrete slabs, but we're up for it.
It seems everyone is having some post-holiday ground activity. The asocial people from the new house down the road have also got the heavy machinery in and are digging a pool.
Alas they have pumps on all night trying to get rid of the ground water, but they are pumping away everything in the area.
My bushes will probably not make it through the scoarching heat predicted this weekend, even though I water them twice a day.
UFO-neighbour's pond level had dropped about 10 cm compared to the day before, he's afraid his fishes will emerge. 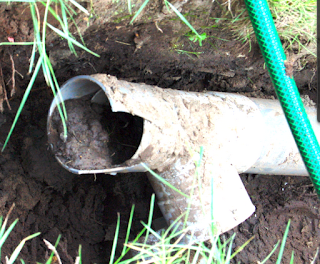 Blocked drains. We haz them.
Well, not any more.
We already found very shoddy workmanship a while back and now was the time to replace them (temporarily) until we can hook up the rain water tank.
One side has completely been done. 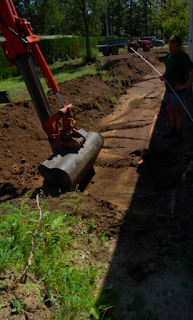 The second picture is the crane digging away some earth about 2 meters from the house to make a nice, broad path for walking and putting some benches in so we can sit in the shade in the afternoon. 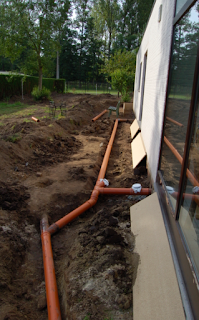 Underneath, but not as deep as we expected are the drains from our bathroom, kitchen and the septic tank.
We replaced all of them (except the septic tank), added an extra entry for the drainage that is going in around the house and an extra entry that gives us access in future to clean the drains. Those can be seen where the white plastic bags are covering the holes.

Of course Mouser had to help and had to see if we had sloped the drains 1 cm per meter.

The worst bit is still to come. We still have to put the water tank in and remove the temp drains. We had to dig the most bit by hand because the guys with the digger couldn't be bothered any more. The first thing I insisted on was putting up a tent so we could work in the shade.

But with soaring temperatures and our bad backs Dr Livingstone called up the guy with the tractor who did the corral a while back and he had time to dig another trench to find yet another semi-blocked drain.
The people who lived here never put any filters in the pipes on the roof so for years on end all kinds of leaves and stuff have been building up inside, clogging the drain and obstructing the evacuation of water. Mind you, while Dr Livingstone was flushing out the rain pipes, a tennis ball popped out!!
Just fancy that!

Although Mouser did look very skeptical at what we were doing.
Poor puzzled kitteh!

The mercury in the digital thermometer reached 32.2ºC today. For this weekend yet even hotter is forecast.
I hope it rains pretty soon. Everything is turning a nasty shade of brown and the anti-social people building a little bit further down the road are pumping up ground water for some shady reason.
UFO neighbour's pond level had dropped considerably and he is anxious for his fish.
I put down a bird bath just in case, but Mouser is the only one using it at the moment. 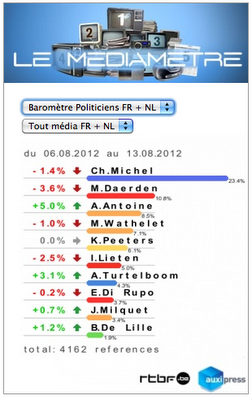 Despite him being dead for over a week now, Michel Daerden is still the second most popular politician in Belgium, only losing about 3,6% compared to the week before, according to a mixture of polls on the rtbf news website.
That should get him re-elected in October, things are looking up for comrade Porsche even after his demise.

What's wrong with this poll?
Well, it's very obvious it's fake, that's what.

I found the USB cable. And therefore I am able to present to you the 'before' and 'after' pictures.
For added effect I will only show the most spectacular bits.
The first picture was taken on the drive way looking towards the neighbour who believes in UFO's. I wasn't kidding when I said we were going tabula rasa!

Then for another angle facing the other way. It's a mish-mash of several photo's which I quickly put next to eachother to make them look like a panorama pic.
This front garden will be filled up with several different bits; a wild flower & butterfly garden, an edible garden, bits of grass, a winding path, a seating area in the shade and a petanque court. Yes, you have permission to snigger. 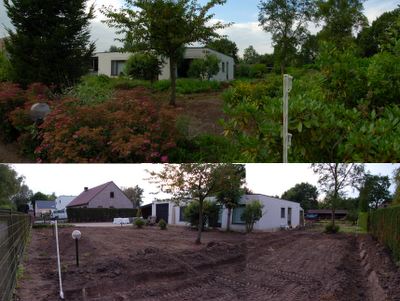 In the third 'before' picture the second layer of concrete was still in place aroudn the house, the 'after' picture has the 2 meter wide gap that will be filled with stone debris and pebbles from the Taunus region. We've already put some planks in place because we cannot fill it up entirely. We still need to re-do the outer walls. 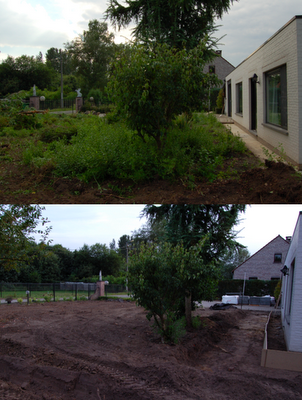 The fourth and final comparison is where the court is going. Some guys are going to put the concrete sides in on Thursday and once those have dried up we can order some trucks with stone rubble and dolomite for the top layer. 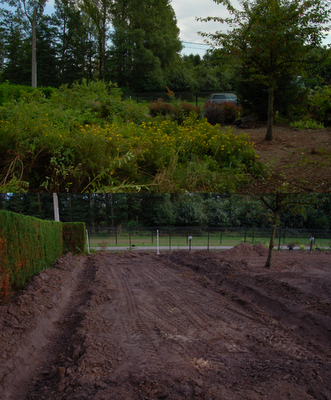 So there you have it. I will leave you with a picture of the site surveyor who's been keeping an eye on things, making sure the concrete waste is neatly disposed of, the workmen are have the regulated lunch breaks and little grey noms going squeak are seen to: 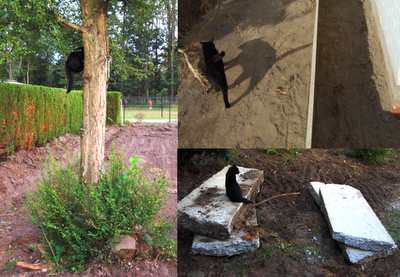 They test the missiles here or what? 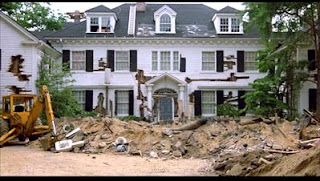 Right, I wanted to blog a little earlier to keep every one up to speed on the stuff going on around the house. I took loads of pictures, but I can't seem to find the little USB cable I need to download them onto the computer.
We decided to go tabula rasa on the garden. Nearly everything has been pulled out and transported away to be turned into compost.
I apologized to each and every shrubbery and tree before they were plucked out of the ground.
The only things left now are two peony bushes, a cherry tree, two other trees -I don't know what they are- but they give enough shade where needed, two bushes which have white leaves in the spring, a curly hazel and something that brings forth pink flowers twice a year.
I tried to salvage as much bushes as possible, I planted them in the corral for the moment, hoping they will survive.

This weekend Dr Livingstone and I dug up drains and replaced them. What a sacré boulot. We haven't decided yet on where we are going to put the rain water harvest tank. We replaced the old rain water pipes so far, but just to evacuate the rain until we can hook them up to a solid system.
We want to use the water to flush the toilet and use the washing machine, we are now doing everything with tap water which is a) expensive b) selfish & decadent.

All the drains were delivered on Thursday, together with the concrete borders which will be placed around the house and our petanque court before the weekend.

Right now the garden looks like a tornado tore right through it.
Or, it could also be described by those epic words of the guy who gives Tom Hanks a ride home in The Money Pit: 'They test the missiles here or what?'
Posted by Mrs B at 10:25 No comments: 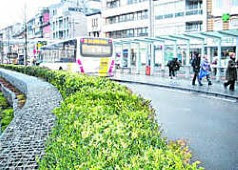 Today, the garden is getting a face lift. Goodbye to a spruce, a fancy looking spar, some bits of birch trunk, some bushes Dr Livingstone keeps referring to as 'council shrubbery', lots of Equisetum arvense (aka the dreaded ponytail) and lots of other brown, green or dead stuff.
The dirty digger is coming and all will be going into the big container in front of the driveway. Earlier this week I ordered some building materials, they are going to be delivered this afternoon.
I still don't know where they are going to put everything. The second container was left in the middle of the drive way...
The guy who is coming later on said he was able to shift it.

Mouser is all excited and wanders around the big containers, looking all puzzled and wondering what the bleep we are up to.

The plan: to get rid of all the stuff in the front garden which is way too much to keep tidy. It is teeming with weeds and it looks awful.
So we decided to go for a 15 x 4 petanque area. That's 60 square meters of non maintenance!
Some 60sm of gravel (well, not exactly gravel but some smooth looking quarts from the Taunus mountain area) is going around the house which will be excellent for getting rid of excess water against the house.
And there is going to be a terrace around the cherry tree. 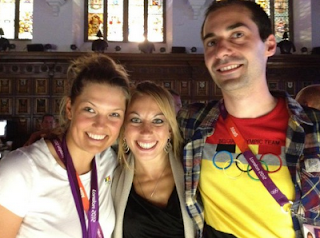 A very nice picture taken by bronze medallist Evi Van Acker (lazer radial sailing) with judoka Charline Van Snick (bronze) and Lionel Cox (silver medallist rifle 50m).The pic was taken in Inner Temple, converted into Belgium House for the duration of the London Olympics.
For now we are on par with Armenia and Mongolia in the medal race!
Posted by Mrs B at 07:46 No comments: