Chicken(s) in a basket 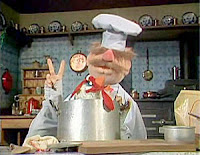 No, not really. It was two chickens in a cardboard box.
Dr Livingstone and myself went to the shop this afternoon to collect the two egg-ready chickens he'd ordered earlier.
We gave them to our woo-loving neighbour and named them Ingeborg and Krimhilde.
The big black one (Ingeborg, the one Dr Livingstone named) was out and about and fended off the other chickens in the coop. It felt at home straight away, pecking at little grains and drinking some water. The other one (Krimhilde, the docile one I named), a cross between a black and a brown one was bullied by all the other hens and was pecked at several times. -_-
Seems they were not amused with the new hens.

An hour or so later we ventured into our neighbours garden again to check out the coop. All the autochthonous chickens were already nesting in the safety of the little chicken house, the two new hens were out exploring the outdoors.
We did tell them the hatch of the little house closes at dusk when the sensor decides to trigger the little motor.
They weren't really paying much attention to us.
Curious if they're still there in the morning... 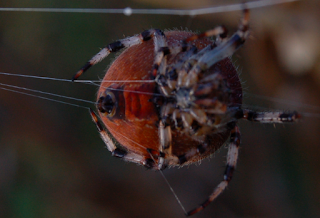 I was watering the plants I had transplanted during the bulldozing and noticed a big shiny red blob suspended between some twigs.
It looked like a raspberry floating in mid air.
No, it was a huge spider with a big red abdomen with white dots over it.
It looks like it is the Araneus quadratus, or the Four-spot orb-weaver as it is commonly known.
Judging from pictures on the web they vary from green to yellow to red.
I presume the green ones aren't ripe yet.

[Yes -for all you movie buffs- that is a slight tribute to Kevin Klein in A Fish Called Wanda].
Posted by Mrs B at 07:24 No comments: 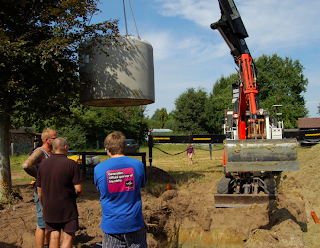 My apologies for the lack of posting, it's been an incredible week and a half. I'm ill, of course, and have been sleeping all day.
I want to give a brief recap on the garden and our activities in it.
We managed to shift all of the concrete rubble, the water reservoir is in (although the measurements the store gave us were not the same as the real dimensions of the thing they delivered), the petanque course is (nearly) finished and we did some weeding too. 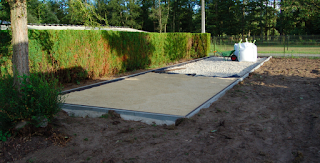 And we managed to shift wood that was delivered three weeks ago, just in time for another load that was dumped here on Friday evening.
Last weekend we went to get rid of the railway sleepers. All 995kgs of them.
It is -very slowly- all taking shape.
Yesterday evening we even had a short inaugural throw with petanque balls!
Oh, and while digging in front of our driveway the crane hit a grey cable which apparantly was the telephone cable from our neigbours.
Posted by Mrs B at 15:59 No comments: