I feel like such a dork.
I cried with happiness when I heard the first 7 TeV collision happened yesterday in the LHC.
I wish I was a particle physicist.
Posted by Mrs B at 21:57 No comments:

I came across a work attributed to Jeremias van Winghe. It was sold at Christies in 2004. It a kitchen interior with a maid preparing meat and some chappies in plumed hats having a drinking contest. 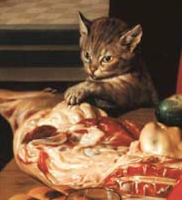 What made me smile was the nice touch of the cat stealing food at the bottom left. Look at its claws digging into the fresh meat, making indentations in the thin layer of fat. The maid doesn't look to upset about the cat fondling the food. I bet she's a cat person. Heh. Cheeky little kitteh. 'Can thou preparest cheezburgherz?'
I should do a piece on lolcats in 17th century paintings.
Posted by Mrs B at 08:32 No comments:

Let me soften you up with a little music

Saturday night there was case of severe traffic agression in Antwerp. Two vehicles simultaneously entered a street, but could not cross each other because the passage was too narrow. Neither driver wanted to reverse. Eventually they both got out of their cars.

One of the two, a 45-year-old man, wanted to attack the other with a banjo which he had taken from his trunk. The other, a 22-year-old, evaded the stringed instrument and threw a couple of punches.
The police have confiscated the banjo.

Well, they do say music softens you up, but one of these guys took it a little too seriously.
Posted by Mrs B at 07:52 No comments: 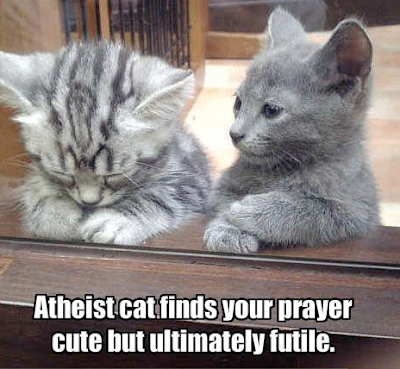 So this guy who thinks very highly of himself was on the radio this morning. He's called Oscar van den Boogaard. Never heard of him before, he's some kind of writer. He was going on about how he was probably still some kind of a catholic, but didn't actually attend church because he thought he didn't need all the magic surrounding religion. And there actually was no need for priests or the church either.

Doens't that make him -er- a protestant?

Oh, and what is all this about (from his personal website): "Oscar van den Boogaard lives in Berlin, Antwerp and Brussels." Is he involved in some kind of time sharing scheme?
What kind of pompous ass puts on his website he lives in three cities simultaneously?
And two of which are only 40 kilometers apart?
Posted by Mrs B at 22:46 No comments:

Helper dog is not amused

In my evening class there's a woman with a helper dog. It's a sweet doggy, but a bit mischievous at best. I thought they're not supposed to react to someone offering them something to eat, or lunge forward if you're nibbling at something.
And that's exactly what this four legged friend did. The blind lady was standing around drinking coffee with us during the break and I had brought a chocolate cookie with me. I always have a little snack to keep my brain going.
The dog started pulling away from her, wagging its tail and drooling while putting on its most beggarly mutt face. The dog's owner didn't know what was going on. So I had to explain to her I was eating a cookie. And then had to turn away so the dog couldn't see me anymore.

During the second half of the lesson, the dog wandered about a bit, then went and had a little sleep under our professor's desk. About half way we suddenly heard the most enormous moan. To everyone's amusement, it was the dog letting the teacher know to get on with his riveting explanation.
Posted by Mrs B at 07:19 2 comments: 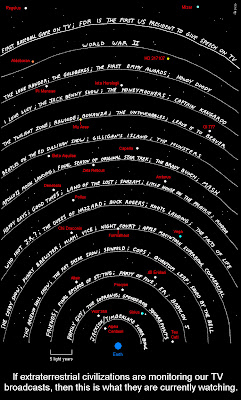 There wasn't much on during the second World War. Britain suspended its broadcasts the day it declared war on Germany. The US and Germany used their programming for wounded soldiers in hospitals and the odd football game. So not too much riveting entertainment bar the propaganda reaching Aldebaran in a few odd lightyears.
Posted by Mrs B at 07:13 No comments: 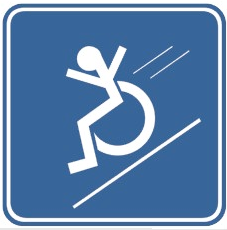 is just so full of fail.

Here's the gist:
-man in wheelchair tries to rob night shop at knife point (is that even possible? Does the shop have wheelchair access? Can the man even see you sitting there from behind the counter?)
-shop attendant not impressed and pushes guy in wheelchair out the door (He could also just have slashed the tires...)
-wannabe robber pulls out some mace, sprays, but the wind prohibits mace from hitting shop attendant (Doh!)
-police drive by
-wannabe robber claims he just unarmed the robber (That must be the lamest excuse ever someone in a wheelchair comes up with on the spot)
Posted by Mrs B at 02:03 No comments:

This summer I'll be in Rotterdam visiting the exhibition on Van Meegeren's forgeries. This is a truely fascination one, not to be missed. Musea tend to stow away their fakes once they are unmasked. The works are condemned to a life in the museum depot, some art experts cannot live with the shame the art has brought upon their reputation and that of the museum.

We wouldn't be fooled anymore by the ghostly, sickly looking figures Van Meegeren painted. But I always take Van Meegeren as a good example and a warning for my own budding research.
- Always take a sceptical stance on everything. Never take anything for granted!
- Even people who are experts in the field make mistakes (in this case one worth 540,00 guilders)
- Science does not provide a 100% conclusive answer (but it sure helps).


:
The exhibition ‘Van Meegeren’s Fake Vermeers’ includes approximately ten forgeries by Han van Meegeren (1889-1947). Most are in the style of Johannes Vermeer, but the works also include forgeries of Frans Hals, Pieter de Hooch and Gerard ter Borch. Van Meegeren’s life as a forger is further illuminated through a documentary film and objects from his studio. 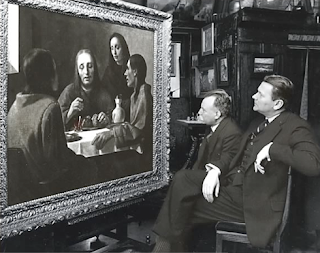 In 1937 the director of Museum Boymans, Dirk Hannema, purchased ‘The Supper at Emmaus’ for 540,000 guilders. There was great interest in the painting, which most experts believed to be an early masterpiece by Vermeer. The Rijksmuseum in Amsterdam even offered Vermeer’s ‘The Love Letter’ in exchange for the painting, but Hannema rejected the offer. Museum Boymans exhibited the work as one of the highlights of its collection and art experts praised the work’s high quality.

Exposure
At the end of the Second World War a painting from the Netherlands was found in the collection of the Nazi minister, Hermann Göring. 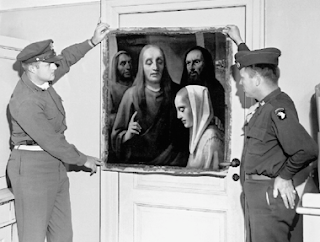 The painting was traced back to Han van Meegeren, who was immediately arrested on suspicion of collaboration. Van Meegeren admitted to having sold the work, but also claimed to have made the painting himself. He had sold Göring a forgery. Van Meegeren’s confession became worldwide news and he was hailed as a hero as ‘the man who swindled Göring’. Meanwhile the art world was thrown into disarray. Van Meegeren demonstrated his forgery techniques to an expert panel and during his trial his forgeries were hung in the courtroom, as can be seen in the documentary film included in the exhibition.

Reassessment
Van Meegeren’s technique remains exceptional. For his masterpiece ‘The Supper at Emmaus’, Van Meegeren used a genuine seventeenth-century canvas and historical pigments. He bound the pigments with bakelite, which hardened when heated to produce a surface very similar to that of a seventeenth-century painting. This technique, combined with Van Meegeren’s choice of subject matter and composition, was an important factor in convincing so many people of the authenticity of his works. Van Meegeren created the missing link between Vermeer’s early and late works. The exhibition at Museum Boijmans Van Beuningen sheds new light on Van Meegeren’s technique, resulting from new technical research undertaken by the Rijksmuseum.

Again, , I suggest reading Edward Dolnick's The Forger's Spell: A True Story of Vermeer, Nazis, and the Greatest Art Hoax of the Twentieth Century and the 1949 book Van Meegeren's faked Vermeers and De Hooghs written by Paul Coremans, who was involved in Van Meegeren's trial and gave evidence as an expert witness. I still haven't been able to pick up Jonathan Lopez' The Man Who Made Vermeers: Unvarnishing the Legend of Master Forger Han van Meegeren. I hope it will be on sale in the bookshop at the exhibition.
Posted by Mrs B at 19:08 No comments:

Every time Mrs B goes somewhere it is an event an sich.
Yesterday I went to the hairdresser. The two girls and Kurt, the obligatory gay employee, were very cheery as usual. Fluttering about and dispensing their usual small talk.
Then two guys came into the shop from the gas company. Apparantly they'd had trouble with the gas supply and this was the morning they'd be working on the mains.
I got a little worried there about there not being any warm water left to rinse my hair. But Kurt re-assured me they'd already been boiling water just in case.
The guys disappeared into the cellar and we started smelling gas.
We (three customers and ditto hairdressers) got a little worried. So Kurt opened up the door to the little patio. Then we all started joking about what would happen if there'd be an explosion. 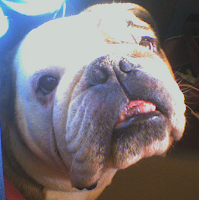 'I hope you're wearing clean underware' Kurt said to his customer.
Reply: 'Is it too early to have a white wine? It could be my last!'
Roaring laughter all round (mind you, it was nine thirty in the morning).
Then the joking turned to the funeral arrangements.
One of the girls is from Turkey and the other is an Armenian. Kurt: 'You know, we've got to have one of those inter religious ceremonies'.
Hilal: 'I don't care, as long as all the bits they recover of me are burried facing east'. More snorting and giggles.
Kurt's dog Miel edged a little closer to me to so I could stroke its ears. It looked at me as if it said: 'I don't wanna go yet'.
Posted by Mrs B at 08:05 2 comments:

How to spoil someone's picture at Oscar Night

I love watching the movie stars dress up in their frocks and glamour gowns. I also keep a look out for the non-celebs queuing in the back, waiting to get in. They're kinda on the red carpet, but not part of the floor show.
It seems some aren't that familiar with the expression 'the camera never lies'. Here are some gems from last night:

Having some weird and fat people in the background always offsets the star. Someone should have a word with that woman's personal shopper: 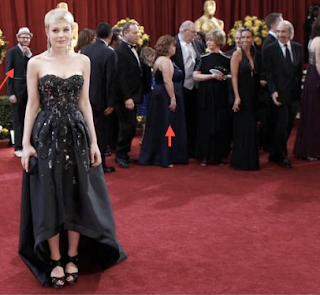 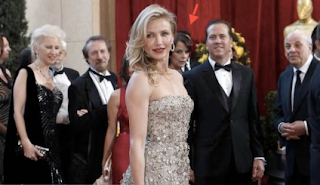 I wonder what they're all thinking, but it's not happy thoughts: 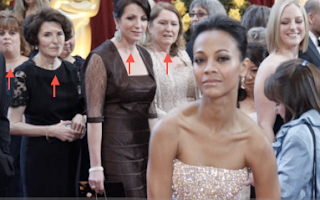 I know what he's thinking, and it's happy thoughts: 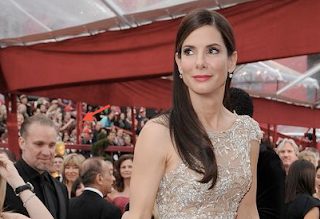 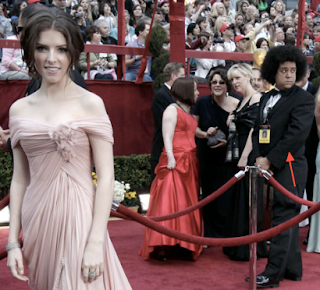 Of all places, the Red Carpet is definitely not the best place to pick a fight with your husband: 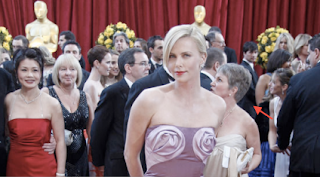