Royalty in the carport 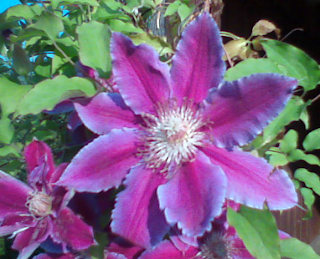 The lovely climatis is in full bloom. When we came to live here I didn't notice it at first. But now it is bringing forth wonderful bright pink flowers and attracting loads of bees to match. Now correct me if I'm wrong here, but this variety is called 'Comtesse de Bouchaud'. So now every time I have to take the car out I need to curtsy.
Posted by Mrs B at 00:07 No comments: 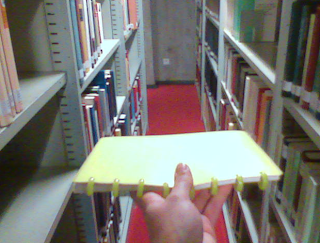 I have proof our house is not the only place that is crammed with a ridiculous amount of books.
I was on the fifth floor of the faculty library. There is not enough room to navigate the shelves. You have to walk in sideways to get at the book. And then you need to bend through your knees and squat in a very inconvenient manner if you want to reach for a book if it is on the bottom shelf.
I had to take a picture and post it here -for added dramatic effect- because no one would believe me if I just mentioned how small it was. The yellow notebook is A5 format. It leaves just a little space left and right of it. A4 fills up the entire space. That's how small it is.
Posted by Mrs B at 00:55 No comments:

The MAS museum in Antwerp has barely opened its doors and already a thief has been active on the premises. The theft of a power horn was reported yesterday afternoon by one of the guards. After teh discovery they upped the security and 'searched the visitors'.
Qudos to the thief for nabbing that horn. It was child's play really. No alarm, not in a lockable display case. And apparently no guards around to see someone meddling with an artefact. Director Paul Depauw said: 'We now know what the critical points are and how we have to deal with the public. There will be extra camera's and also 'do not touch'-signs. Some of the objects will be moved behind plexiglass walls'.
Sorry to roll my eyes here, but I seem to recall an article that appeared in The Economist not two weeks ago where Depauw says: “if you don't take care of objects, who is going to tell us stories about the past?” 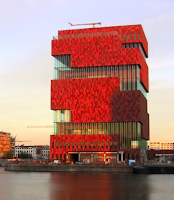 Yes, and who is responsible for taking care of the objects and telling stories?
How can you not notice the critical points before opening. Never heard of a risk assesment?
And the measures that will be taken; they're as useful as fitting an alarm to a house that has already been burgled. Or, to use Tom Flynn's expression: that will be as effective as installing an ashtray on a motorcycle. Or in Blackadder's: as useful as a cat flap in an elephant house.

Tragic as though it is, this goes to show (again) the sheer naieveté Belgian museums have concerning thefts from public musea. Putting up 'do not touch'-signs. Will you believe it.

x-posted from The Art Detective blog.
Posted by Mrs B at 00:51 No comments:

The night has eyes

I'm being guarded at night. By a female tawny owl (strix aluco) no less. She's been making enough noise outside the window to wake the dead. I'm not letting down the blind, I might frighten it away. How I wish Dr Livingstone was here to hear it, he is really keen on the winged little predators. Mouser not so, as they're eating all of its favourite food.
They're going to have to battle it out who's on the top of the food pyramid.
Posted by Mrs B at 22:26 No comments: 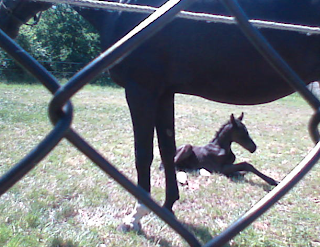 Just like at the last house, there are horses on the other side of the fence. And as of last couple of days +1 horse to be exact.
There had been a lot of ruckus going on one night, in the morning when I opened the gate to drive the car out, there it was: a brand spanking new horsie. Its hooves are still pristine white. Poor dear is asleep every time I glance outside.
Posted by Mrs B at 00:02 No comments:

The new cow in town 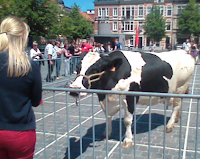 I was a bit startled to find a cow on the Ladeuze square on Wednesday.
A socialist trade union had organized a spot of Crap yourself rich, proceeds would go to the Cancer Fund.
At 1.30 pm the beautiful beast was let out of its box.
When I came back from class around 4 it still hadn't crapped. 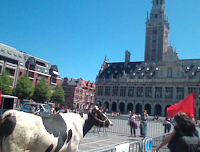 Never in my life have I ever seen so much people stand in expectation of a cow doing its business. Really.
It must be like watching wallpaper dry.
Honestly. If you were a cow, would you be able to go with all those people looking at you?
Posted by Mrs B at 00:41 No comments: 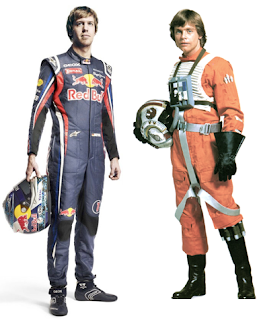 Ok, just one more Star Wars lookalike.
Luke Skywalker and Sebastian Vettel.
Looks like the Red Bull Racing Team has been using The Force to win all those Grand Prix.
The International Automobile Federation probably have got a rule for this.
Posted by Mrs B at 01:52 No comments:

Same hair, different decades.
Joelia Timosjenko and Princess Leia.
Posted by Mrs B at 01:28 No comments:

Too busy for anything

No new posts since last week. Too busy doing stuff. I'm finishing starting a paper on Magritte which is due on Monday. And finishing another on an early sixteenth century panel, which is due on ... Monday.
So no rest for the wicked.
I finally managed to do some shopping today, which was long overdue, since I hadn't bought food since Dr Livingstone was home. Well, except for that loaf of bread at the start of the week.
I've been doing the full student experience this week, even eating at the student restaurant.
And subsequently having a gruelling cold and germs to match. Bleh. I hate being around that much people.
Anyhow. I'm going to resume my creative writing, shove some healthy fruit and veg down and then finish the day with a nice detective on the telly.
Posted by Mrs B at 16:59 No comments: 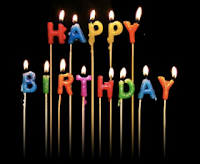 I posted you a blog entry but blogger ate it.
Blogger had issues on Friday and all posts I made disappeared. So I had re-post birfday greetz.
Posted by Mrs B at 08:17 No comments: 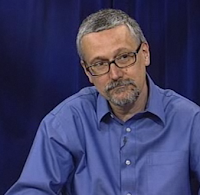 Just got back from an entertaining lecture by Neil McWilliam on the politics of traditionalism in French art (1900-1914).
I was familiar with the work of Emile Bernard just up to the point he left for Africa. This because I had recently read 'The Yellow House'. What I didn't know was how Bernard's work evolved from the cloisonist to the idéalist style he later defended within his favoured approach of art (dubbed traditionalism). Very enlightening and very elegantly worded by Professor McWilliam.
I refrained from asking a question as I didn't want to make a complete arse of myself in front of my two professors who organised the lecture.
I don't know why but throughout the words Marcel and Proust leapt to mind...
Posted by Mrs B at 19:14 No comments:

I made my way to yet another faculty library to get some books -well, duh- for my paper. Looks like they haven't been read much at all over the past 100 years. They're the type that has pages that had to be sliced open before you could start readig.
The sides look like there have been mice at it.
Posted by Mrs B at 18:35 No comments:

Metallica in the library

When I was strolling from the faculty library to the central library, the belfry was playing. Every Wednesday during lunch hour sweet tunes emerge from the tower. Not your some unknown music, but the musician manipulating the bells adapts contemporary pop songs. Yesterday, during my brisk walk, I heard 'Killing me softly' by The Fugees and an excellent 'Nothing else matters' by Metallica.
The library is absolutely dead silent (except on market days), but when the big bell is struck you can feel the sound going through the whole building.
Posted by Mrs B at 07:14 No comments: 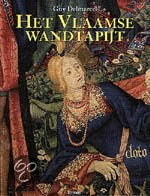 I brought this beauty of a book home with me on monday. Het Vlaamse Wandtapijt by Guy Delmarcel. The student club had put in an order for a massive amount of this work and was able to sell them to us at a discount. A bargain at just 15 €. It's sold out at most bookstores.
I'm taking a course on decorative arts next year, and it was recommended to us by a professor.
I'd say tapestries are one of our most successful export products to date. That and vertical windmills.
Posted by Mrs B at 07:07 No comments:

Statler & Waldorf at the archive

I was at the Mechelen city archive today working on my next paper due at the end of next week. Very friendly people. The reading room is in an attic. Tables are shoved underneath the sloping roof. So tall people like me need to be cautious not to bump our heads when standing up or moving around. I bumped into a roof beam, although I managed to dodge most of it. I didn't hit it head-on like Dr Livingstone hit our glass door last month.

The archive opens up at half past eigh, I got there around quarter to nine, traffic was slow. Next to my working area were already two pensioners hard at it. They were reading aloud to each other. They were like Statler & Waldorf.

Anyhow, I ordered tons of archive material to thumb through. I was halfway into a box of stuff and found something of interest. I'm currently doing research on a cycle of 25 paintings on the life of Saint Rumbold.
I discovered a missing tableau. Hurrah!
Alas, that was not really the focus of my angle. I was writing about them from an iconological viewpoint, more specifically the nachleben of some panels in 19th century building 'restauration'.
Ah well, can't win them all.
Posted by Mrs B at 20:03 No comments:

If someone knows what these flowers are called, please post me a name. There are three stunning bushes which I can see from the living room and kitchen and are all of them sporting three different kinds of coloured flowers. 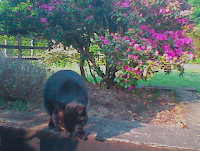 One of them is the bush I so drastically pruned earlier this season. In the old place there were lots of these kinds of bushes and they used to blossom two to three times a season. The only thing I know about these coloured bee traps is that I am allowed to prune them just after they've flowered.
Posted by Mrs B at 00:11 No comments:

Greetings from the garden 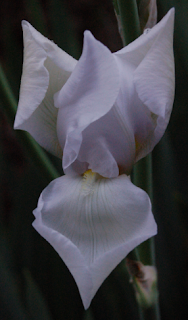 A very lovely surprise when I opened up the front door to let Mouser out. A solitary flower greeting me in the morning.
All prim and white, slightly glistening with morning dew.
It exceeded all expectations of what would come out of the buds I posted on earlier. I thought they were going to be some king of ordinary orange or pink. But this pristine white bloom is so pretty. If I were a bee I'd choose this one to gather pollen. It has these attractive folds. Nature really outdid itself again.
Pitty Dr Livingstone is not around to see them.
Posted by Mrs B at 00:03 No comments: