I was on the scavenge again for a free Mini fleece blanket. Before I could enter the Mini site this challenging box appeared. Thankfully I grasp the concept of reverse reasoning but I'm sure loads of people do not. Or just do not understand one or the other language.
I wonder how many people end up clicking on the button that still leads to a page in a language they don't understand.
Someone's been thinking about this one. I think it's very clever.
Posted by Mrs B at 07:26 No comments: 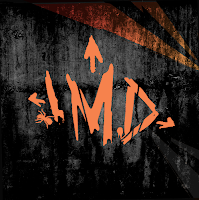 Another freebie:
Invaders Must Die. New single by The Prodigy. Available for free download on their site .
Doesn't sound bad either. Has that typical Prodigy sound to it. Starts out with a little rumble/tingle like No Good and then a reminiscent Breathe kick up.
For a limited time only! That's a Merry Christmas from the band to the fans. Full Album out in March 2009.
Posted by Mrs B at 07:45 No comments:

As mentioned before, I'm not one to pooh-pooh freebies. So here to share with you all:
Interested in science? Even only slightly? Wanna know what the Belgian government is spending our pennies on?
Sign up for a free subscription today. Go to the science connection website and start clicking. Past issues available for download too.

From the website:
The Belgian Science Policy has launched a new magazine "Science Connection". This free publication (five times a year) is designed to provide an in-depth review of the office's various components. Those who are keen on space, the arts or scientific trends will definitely be astonished at the items on offer in this publication issued by the "Ministry of Knowledge".

. Miniknow? Good thing they added those brackets themselves... 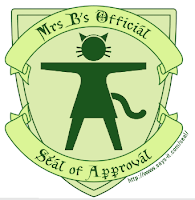 So this gets a big thumbs up and Mrs B's prestigious and much sought after Official Seal of Approval.
Remember, only if you see this Seal you know it has been verified and scrutinized for the sake of it's trustworthiness and guaranteed hours of pure, unadulterated fun by me personally.
Posted by Mrs B at 08:26 No comments: 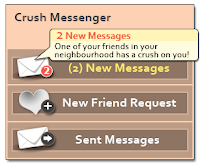 Scientific Outreach with a difference

winners were announced on Thursday!
For those of you who have never heard of it: It's a dance contest for people with PhD's.
Researchers from around the world are asked to interpret their Ph.D. research in dance form, film it and post it for all the world to see on YouTube.
For a quick run down on this year's winners: navigate .
For a complete list of entries with videos check .
So who said scientists were locked in an ivory tower? Last year's winner was an Oxford achaeologist sporting nothing more than a translucent loincloth.
Posted by Mrs B at 08:35 No comments:

I feel sorry for the guide we got when visiting the on Tuesday.
Trust me to be in his group and ask him questions he did not have the answer to (I swear I didn't do it on purpose).
One of my fellow students pointed out he resembled . I haven't seen any Lord of the Rings movies, but I did seem to remember that in popular folklore elves tend to have pointy ears and do not have pierced eyebrows.
Funnily enough there are several exhibits made out of Elfenbein (=German for ivory) on display and that made me chuckle all to myself.
Posted by Mrs B at 09:42 No comments:

I love the Middle Ages. Now if only I could remember all the details about roughly 700 years worth of information on economic, political, religious and cultural matters, my trial examination on Thursday will be a breeze.
Posted by Mrs B at 07:34 No comments:

"All sex really boils down to is actually just two people trying to overcome gravity."

That makes me stop and think about the first gravity experiments that were carried out by dropping balls from the Tower of Pisa...

I really read too much into these things...
Posted by Mrs B at 16:42 No comments: 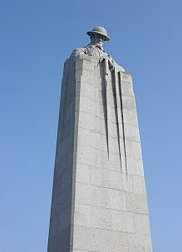 Napoleon is a kitchen utensil 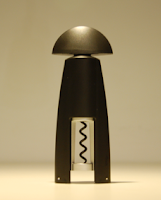 Because Dr Livingstone broke the wing corkscrew (I told you it wasn't me!), he went out and bought one of those designer ones to replace it.
I have a severe case of pareidolia: I think it looks just like the silhouette of Napoleon in hat and cloak, legs a little astride.
Posted by Mrs B at 07:34 1 comment:

It wasn't me (really)

Honestly, how many times have you heard that someone broke their wing corkscrew?
What was that? I have a 'Never' at the back. Thank you.
Moldy corks break, glass might shatter on a rare occasion, even eyes get poked out now and then when the contraption is used to remove a stubborn stopper (I once had a narrow escape as an interested moppet).
Ours has broken in two. Is it a severe case of metal fatigue? Or just plain old overuse?

Is this the face of America's new superhero?

It could turn out his legislature could be a lot like the plot of Superman III:

Disguised as an Army general and a WAC officer, McCain and Palin give Obama a chunk of republicanite as a gift, and are dismayed to see that it appears to have no effect on him. However, the compound begins to produce symptoms: after a flying, ambitious start of his presidency Obama becomes selfish, which causes him to delay in rescuing the troops serving in far away countries, delaying environmental and health reforms and to question his own self-worth.
As the budget cuts take effect, Obama becomes depressed, angry, and casually destructive, committing petty acts of vandalism such as blowing out the Olympic torch and straightening the Leaning Tower of Pisa. The Republicans, seeing this, create new plans and order a supercomputer to be built.
Obama sullenly assuages his depression with a drinking binge, but is overcome by guilt and undergoes a nervous breakdown. After nearly crash-landing in Afghanistan, he splits into two personas: the evil, selfish Obama and the moral, righteous Obama. The evil Obama and Obama, the embodiment of his remaining good qualities, engage in an epic battle. Although Obama is initially overpowered by his alter ego, he eventually takes the upper hand, feverishly strangling his evil identity until it fades from sight. Thereafter he is restored to his benevolent former self and continues to save the world and is elected to a second term.
Posted by Mrs B at 12:13 No comments:

Finally The Crazies (that whole Reagan entourage that was reanimated) are going to get turned out of the White House. I can't wait to see the look on Dubya's face in January. If you're going to miss the bushisms, download the , "The Artificial Oval Office Occupant Simulator". (Mac OS X only). It makes political statements much like a certain Mr. G. W. Bush might do. Passes every single time you click the button. Actual quotes make up over 90 percent of the statements generated by the application, the other 10 percent being filler material.
Mr Obama is going to have a lot of hard work to do in the New World. Let's hope it is not just all talk but he surrounds himself with some good advisors. It'll be a rough four years. But I'm glad so many people went out to vote.
There is one thing that gets up my nose every time I hear it. They always blurt out 'God bless America'. I don't get it. Not fair on all the atheists and people who dig Vishnu. And they keep saying it in the imperative. No wonder the country has been going downhill. The mythical creature they seem to be referring to obviously hasn't been blessing it.
Maybe the slaughter of a few innocents on the altar of democracy might help?