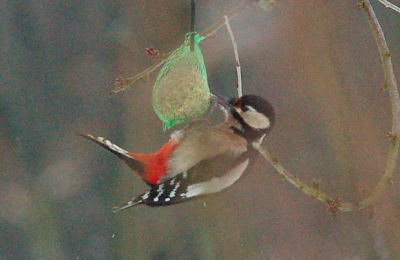 I've been putting down food every day now since the snow and replenished the balls in the trees. The birds seem to like it (and need it), not a single crumb remains.
This morning, much to my surprise, a Great Spotted Woodpecker (Dendrocopos major) was dangling off one of the balls.
They're usually very shy and easily scared. I managed to grab my camera and take a few pictures.
I'm sharing the best one here. 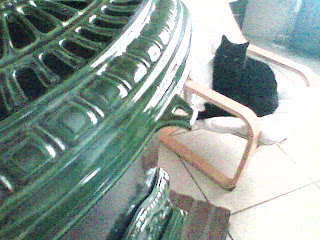 Finally winter has arrived. Snow! Ice! Cold!
I've put out fat balls and crumbs for the birds.
Mouser is prancing around in the snow, not too long, but Coldcat™ has no choice when there is business to be done.
The Continental stove has been its best friend all week, they stick together like glue.
Except when the fire goes out during the night, then teh kitteh yelps, jumps on the bed and cuddles up to me. ♥
It just stopped snowing.
Great weather for hiding under a fleece blanket, drinking some gluhwein and watching the Cyclo Cross on the telly.
That's me sorted for today.

Leave me alone. I know what I'm doing.

I got Dr Livingstone one of these. He liked it. It seemed appropriate and something he would say too. 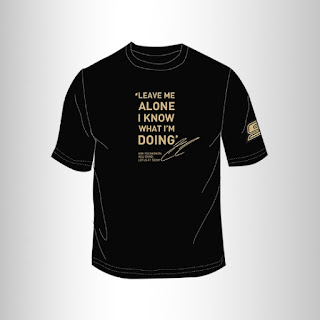 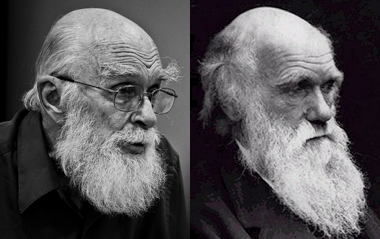 James Randi and Charles Darwin. Are they related? If so, I think we must be told.
Posted by Mrs B at 11:02 No comments: 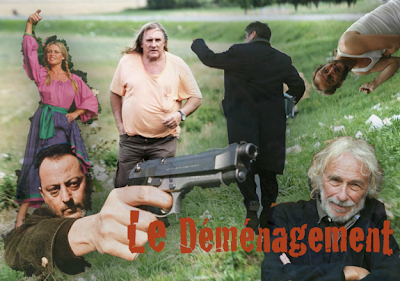 Here's an idea for a French movie rooted in reality:

The Title: 'Le Déménagement' and will be in theatres across Europe in 2013.

The Plot: A wealthy French couple, the Dépardots, played by Gérard Dépardieu  and Brigitte Bardot, are hounded by the French State's tax department and collectors (Pierre Richard). Their close friend and President of the French Republic (played by Daniel Autieul)  is -because of political pressure- not able to help them and advises them to move to Belgium to avoid paying huge amounts of money.

They end up buying a house in a sleepy Belgian village called Estaimpuis. What seems like a simple moving of house quickly turns into chaos as they encounter the mayor of Estaimpuis (Benoit Poelvoorde) and a former Russian hitman (Jean Reno) trying to persuade them to assume the Russian nationality.

Menace of the interior 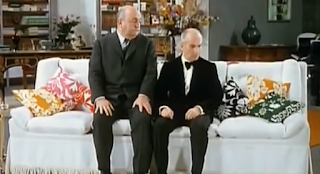 I've just finished my first paper on interior design.
I tried to make it more light to write about interiors in comedy movies, but I got bogged down in philosophy and it turned out to be quite meta and is probably unreadable for lay people.
The professor I'm writing it for did get her post-doctoral degree in philosophy in München, so I hope she'll like it.


"This paper explores the impact furniture and it surroundings have on the protagonist in neo-realist comedy. It is an exercise in combining formalist film theory with design studies, which both analyze forms of visual arts.
In the introduction the outline for a definition of the neo-realist comedy genre is sketched and the delineation of film theory is given and some philosophical underpinnings of design study are touched upon.
Using several examples from 1950’s, 60’s and 70’s movies the argument is made that furniture exerts a power and hold over individuals. The underlying mechanisms are exposed throughout and common denominators analyzed by using theories explored in interior design studies.
Not only do some pieces of furniture pose as a menace to comfort and dignity, but also to reputation and -ultimately- life itself. Each category of menace is elaborated on. Some contemporary examples will be linked to the ideas behind the set design or revealing the unseen and unexplained.
It concludes that furniture serves as a gimmick on several levels to support the alienation of the individual in the society that is shown in cinema."

The title is: 'The menace of the interior. Furniture in neo-realist comedy' and it will probably never get published!
Posted by Mrs B at 00:10 No comments: 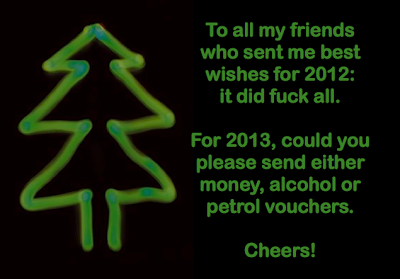