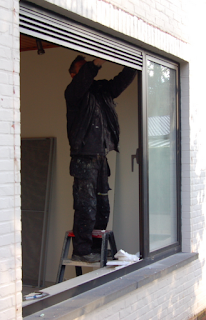 Hello my lovelies, it's been far too long since I blogged again. I'm still trying to get the hang of the new blogger dashboard interface. I tried to hold on to the old one as long as possible, but alas.

Anyway, what has been going on in my world recently:
1) As of two weeks I am now known as Mrs B, BA. Yes, I finally got that degree. With great distinction too I might smirkingly add!

2) We rented a machine to plough over the garden. It looks grand, but the grass and weeds are springing up.

3) the petanque area is finished!

4) three men are here and taking out all of the old windows and putting in new ones. They're in luck. The sun is out and it isn't raining today. So let's hope it stays that way.

5) We still have to shift the second sh*tload of wood we received over a month ago. We're both knackered and there's just not enough time to do everything we want.

6) Dr Livingstone and myself attended a wedding where strange things happened like waving about napkins (twice) and dancing something called a polonaise. If time allows I will dedicate an entire post to this... I will leave you with a picture from this morning when the lads turned up and removed the old double glazing.