This boring book is in a way interesting but overall gets filed under 'boring'. I'm talking about Prêtres et scientifiques by Jean-Michel Maldamé.
I thought this was going to be an interesting read. I got bogged down. It took me three afternoons to finish a mere 200 pages.
The outset is good: What is the relation between science and religion for some well known priest-scientists and did they conflict in any way in their research? 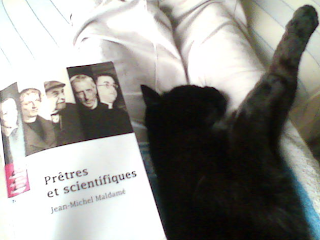 To investigate this he chooses five priest-scientists from Pierre Gassendi (tried to reconcile Epicurian atomism with christianity), Bernard Bolzano (of Bolzano theorem fame; he is erronously named 'Pierre' Bolzano on the cover), Henri Breuil (prehistorian), Pierre Teilhard de Chardin (famous for having conflicts with Rome on the doctrine of original sin and a less strict interpretation of the book of Genesis) and home-grown George Lemaître (alumni of my university and the first person to propose the theory of the expansion of the Universe, widely misattributed to Edwin Hubble). The choice looked very promising. Different fields of research, different time periods, different stances on the religion/science relationshop. But...

I don't really like the way French authors write. They never use one sentence if they can say it in three. If I were just to read the two pages of the conclusion every scientist gets at the end of his own chapter that would have saved me a lot of bother.
Plus the author is very much biassed, being a dominican himself. He interprets certain things as very pious or courageous in light of religion and priestly devotion to the catholic cause.
Plus I cannot stand sentences with exclamation marks.

I did like how he explained the way the religion shaped the scientific research or the philosophical and theological work of the priest-scientists, although Lemaître stressed several times that religion had no place in scientific research and vice versa. Somewhere toward the end Maldamé concludes that these five men voulu lier les champs du savoir separé. But he does not present any convincing evidence for the case of Lemaître, quite the opposite.

Of course the author chose 5 individuals who were easy to analyze because they had written a lot about their relationship between their research and their religious background and calling. But I would like to have Maldamé broadened his research and find some priest-scientists who failed to keep religion separated from their science. I'm sure he could have equally found five of those which would have made a more varied and balanced read.

Anyway, it was a compulsory read for a subject I'm taking this year on the Church in society in the 19th and 20th century.

Still no change in weather. Mouser is choosing the lesser of two evils. Sleeping on the bed or sleeping on Mrs B. 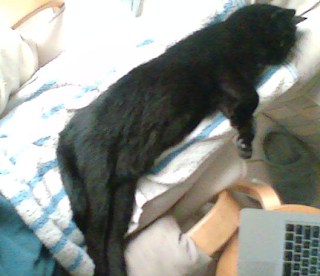 Nine days on since my last post and I woke up (again) to a nice white sheet of snow covering the garden.
I had been busy in the garden on and off these last couple of weeks (weather permitting). 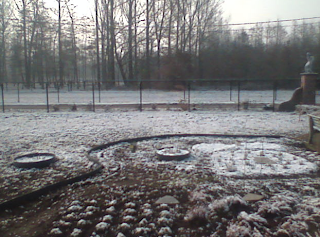 All the trees and shrubberies had a good trim before -what I thought looked like imminent- spring.
I got rid of some annoying green ground cover (about four wheelbarrows).
Then I went on a garden centre shopping spree. I planted some 12 English Lavender plants (Lavandula angustifolia), bought a Common Broom (Cytisus scoparius), and a variety of sedum plants which I combined with some I had transplanted from our old garden and had kept to replant when the time was wright. Another sort of ground cover was planted alternately being Vinca minor; the white breed 'Gertrude Jeckyll' and the purple variety.

I also planted loads of gladiolus bulbs but nothing seems to be happening.

I also fetched a flexible border. Dr Livingstone didn't want a straight path in front but a winding 'romantic' one. So flex border it was.

Then I stumbled upon a sale of viola in hanging baskets. I got 9 of them (3 yellow, 3 white and 3 purple) and they're fixed to the end of the roof beams of the conservatory now.

I also wanted a small herbgarden. I got in oregano, thyme, rosemary, basil, chives and parsley.
I fashioned a small raised planting box (which was pre-made), mixed in our own soil with some fertilizer and extra chalk and put in everything.
So far the basil has not survived the extreme low temperatures.

I have sown some dill in the conservatory, that should be coming out in a fortnight.
I still want coriander, sage, huge amounts of mint (mmmm, lovely fresh mint tea!) and maybe some fennel.

This week I got some eight or so strawberry plants and yesterday I got in blackcurrent, raspberries and red berries (Ribes family). Three of each for starters. We would like to plant them next to the car port together with apple and pear trees. The siding of the car port is a dark brown now and gives off loads of heat. Dr Livingstone wants to renew the sides with stuff they use on the side of lorries, as they require a lot of paintwork and something low-maintenance would be a big plus.

Dr Livingstone has been digging some trenches here and there (as long as his back permits). We still need to have some borders put in to make the garden look a bit better, corner off some areas. The guys still need to sow in large parts of the garden with grass and make some kind of sitting area in front of the conservatory, around the beach tree and make a parking space for my car.

They were here to look at the job to make us an estimate, but they haven't got back to us with a price. Nor is the weather helping us either. It is still freezing at night and temperatures do not go above some 8ºC during the day. Even if there is a small bit of sunshine, the wind makes everything ice cold.
I don't think the shrubs have survived the winter which I wanted to save and had 'translanted'. After the severe drought in august/september, the extreme wet fall and now extende winter, I'm afraid there's not much going to be left of everything.

On top of that we also need to get rid of the excess dirt where currently the exercise area for the horses is. The wrong kind of sand needs to be shifted and half of the terrain is going to be grass too. And we need to have some comfortable garden furniture so we can do some naps here and there or sit beside the petanque-area with a pastis in hand.

So lots still to do! 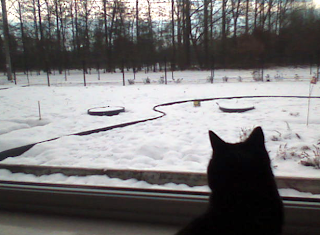 I leave you with poor bewildered Mouser looking out for better weather.

March, you're doing it wrong

First day of the astronomical spring and it snowed today! 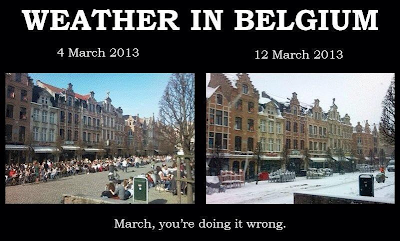 In other news this jem of a banner popped up a while ago on the online front page of a national newspaper. 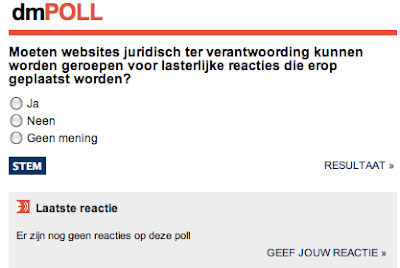 The question of the poll read: 'Do you think websites should legally be held responsible for defamatory comments that can be posted on them?'

Funnily enough, the comment box of the poll read: 'There are no comments so far on this poll'.

Strange things get cancelled during winter

More from the hilarious snow-news corner: while scanning the traffic pages of the police on Monday I came across a message displaying parts of roads that could be suffering from disruption due to roadworks.
But if you read it literally, that's not what is says, there is absolutely no mention of roadworks whatsoever.

So in short it actually says: Nocturnal hindrance canceled by wintry weather.

That would be a eucheminical question. 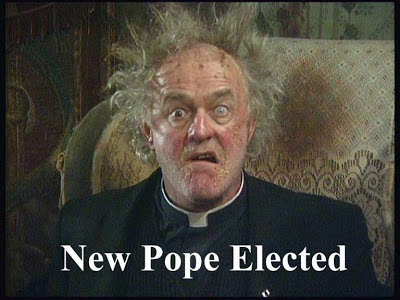 Just a few centimeters of snow and the whole country slips into utter chaos.
Or not as is the case. Just media scaring people to death with 'total chaos on Belgian roads', 'No trainservice due to severe weather' etc. 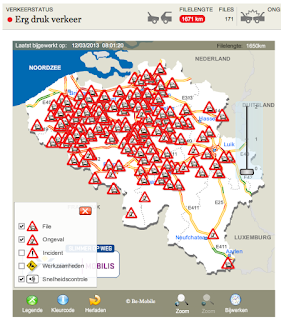 I took a screenshot of the traffic centre map yesterday morning while enjoying a nice cup of coffee before driving to work.
I didn't even know we had 1600km+ roads here. I looked it up on wegenwiki, which is a wikipedia for roads and according to the site we only sport 1763 kms of motorways.
Posted by Mrs B at 09:12 No comments: 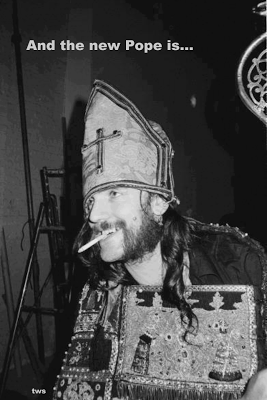 What the hell are they getting up to in that Sixtine Chapel?
I've never seen such utter black smoke billow out of a chimney! As if it came straight from Satan's bottom.
I mean, we all saw the Italian fire brigade on the roof installing the pipe extension but did they sweep the chimney first?
They could be in for a down right nasty surprise down in the Vatican.
All those cardinals sealed up in a room. They could all have died from carbon monoxide poisoning for all we know.

Alternatively, they could be:
a) having a barbeque
b) having an old fashioned cross burning
Posted by Mrs B at 21:04 No comments: 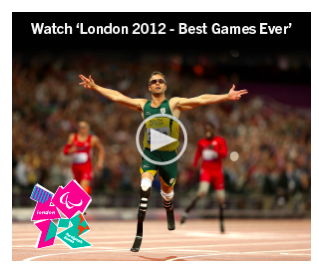 Bit of a no-go on the Paralympics website. I was looking for the events that are going to be hosted at Sochi at the 2014 winter paralympics. On the homepage of the London 2012 Paralympics under the banner 'Best Games Ever' I saw following screen still: Oscar Pistorius crossing a finish line with his hands in a gun hand gesture...