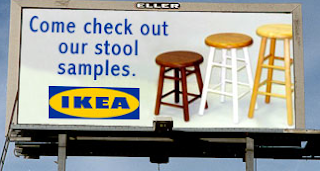 We've taken the test many times, yesterday was the toughest one so far.

Dr Livingstone suddenly decided to get the office sorted and get some bookcases in we wanted since we first moved in and got rid of the old ones. And also a sofa which turns into a bed. So I can sneak away at night if the snoring gets too loud. So we measured the available space (again) and chose the stuff we wanted (again), lent a van (again) and drove all the way to the nearest IKEA store (again). We were there about an hour before closing time, not too much people about. Time was pressing on, so we quick marched across the obligatory display route and went to look at and test the sofa-bed. It was ok, except the colour for the cover. I had already printed out the location of the bits and pieces we needed in the self-service area, so we were well prepared to get out as soon as possible. Dr Livingstone started to speed walk slightly as we navigated our way to some trolleys. 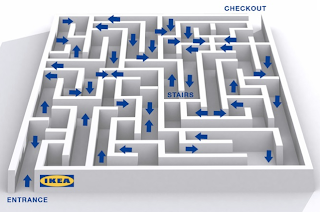 We thought we had found a short cut (and we did!) but no trolleys to be seen, so we had to walk past shelves of cutlery, rugs, cushions, greenery and candles. Which seemed to last for miles and miles. We got two trolleys and sped towards the Bedthingy. Everything was in place, bar the cover. So we got a grey one.Dr Livingstone dropped the parcel the frame was rapped in, he could get his hand in the cardboard and things were rattling inside, so we decided to change it for another one. Up to this point he was extremely annoyed at everything. From the display of the stuff in the shelves, to me wanting to verify the numbers on the boxes and the store closing in 20 minutes. Next up: the bookcases. We got a large packet on the second trolley and then proceeded to the single, smaller ones. 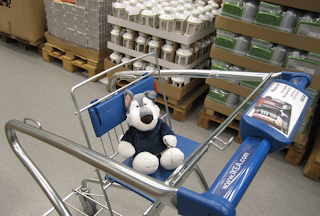 Empty shelves. Great. Nothing in stock, while the IKEA system promised us everything had to be there. 'That's it. I've had it with this bloody store. Leave everything. We're going.' I wasn't leaving empty handed. We had just moved heavy parcels and I wasn't going to drive back with an empty van. We didn't speak a lot on the way back. We ended up having a bite in the restaurant close to the workshop. I checked the IKEA stock on Dr Livingstone's smart phone. 14. There should be 14 ruddy pieces of plywood in stock. They must have cloaked them with an IKEA force field, because we really didn't see a single one.
Posted by Mrs B at 09:13 No comments: 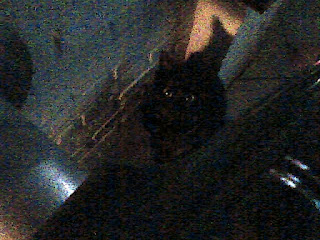 Mouser was very surprised today. First real snow of the season, and Kiteh stayed out for at least 10 whole minutes and spent the rest of the morning safely and snugly tucked behind the woodstove. I took a snap, the quality isn't that good, but you can see Velvet Claws™ there not planning to go anywhere soon. 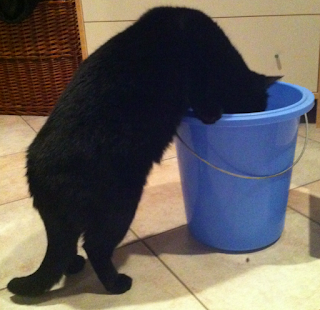 Mouser has taken to drinking from a bucket in our bathroom.
That's right. Not from the toilet bowl (although Dr Livingstone has told me he did see Kitteh do it before).
Mouser has fresh water next to it's nomnoms bowl and still blue buckets are the preferred modus operandi.
If Mouser wants to get into the bathroom I need to open two doors which separate it from the living room. I call it 'drinky-drinky'. Yelps ensue in recognition of the sounds I make which are by now associated with drinking from large blue buckets.
I couldn't resist making a snap of Velvet Claws™ in action.
Posted by Mrs B at 21:45 1 comment: 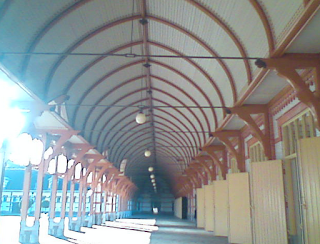 I went on a school trip to Dutchistan on Thursday. After getting stuck in traffic and a huge detour because the bus driver decided to slavishly follow his gps, we visited the Royal Palace Het Loo in Apeldoorn. One of our professors had arranged we were able to see the carriages collection behind the glass partitions. Of course we were more than half an hour later then ETA.
One of the chief stable managers showed us around, locking and unlocking doors to rooms where the public is not allowed to come. 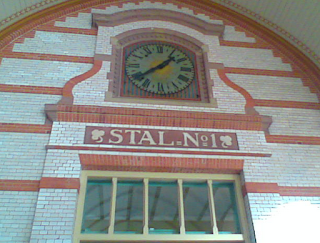 After the stable tour we visited the palace itself. It was the object of much discussion and controverse in the eighties when restaured. The romantic garden was demolished and a 17th century garden planted instead. A lot of the rooms that had been changed were remodelled according to the original Daniel Marot designs and contemporary accounts of visitors to the William & Mary hunting pied-a-terre.

The arrangement and furnishings of the room do give an excellent idea of the shift in styles in furniture and interiour design from the late 17th century up till the 20th.
If you're not really very versed in furniture periods etc. I recommend the audio guide, which does give a lot of context about the kings and queens who resided there too. 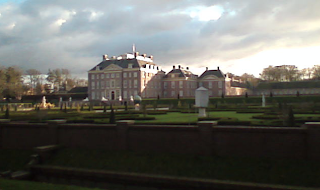 On the whole, we as art students enjoyed discussing the furnishings. It was an agreeable visit. Alas we didn't have time to stroll around in the forest next to the castle. I think a visit is worthwhile, but if I were to return, I'd come back in spring or summer to explore the grounds too.
Posted by Mrs B at 09:22 No comments: