It has reached the point of ridiculousness. Mouser's little is being a bit of a nuisance. It clings to the poor little cat like a shadow.
And it doesn't do anything. It just sits there and watches. And stares. Good thing it doesn't ring up at odd times or something.
It has peed on my car come to think of it.

I washed it down, but the place it'd hit was just the right hight for a cat spray.
The minute it starts wearing a trench coat with rolled up collar hiding in the bushes with a pair of binoculars, I'll be on the phone to the police like a rat up an aquaduct.
Posted by Mrs B at 08:21 No comments: 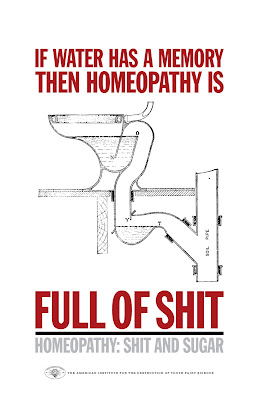 I've said it , I've said it a thousand times, I do not like those stupid facebook apps. No matter how hard I tweak the filters and try to bar any of those silly things showing up in my feed, some do manage to sneak through. It's annoying. It's noise.
But this one caught my attention. It is double entendre prone for sure. For privacy's sake I took out my friend's name. (click to enlarge)

My reaction to that would be (in following order):

Massive damage to heritage after quake

Yesterday's earthquake in L'Aquila, Italy caused ''huge'' damage to the medieval city's artistic heritage, Heritage Ministry Secretary-General Giuseppe Proietti said. The apse of the Abruzzo city's largest Romanesque church, the 13th-century Basilica di Santa Maria di Collemaggio, had collapsed ''from the transept to the back of the church,'' he said.

The Basilica, with its famed pink-and-white jewel-box façade, was the site of the coronation of Pope Celestine V in 1294 and thousands of pilgrims still flock there each year.

The Porta Napoli, the oldest and most beautiful gate to the city built in 1548 in honour of the Holy Roman Emperor Charles V, was destroyed in the quake.

There were also concerns for the National Museum of Abruzzo, which is housed in the 16th-century castle.

Created in 1950, the Museum unified the collections of the civic and diocesan museums as well as a private collection of paintings from the 17th and 18th centuries and includes a beautifully preserved fossilised skeleton of a prehistoric elephant found near the town in the 1950s.

The castle suffered a collapse on its third floor and is too dangerous to enter, according to Proietti.

''The store rooms where damaged works are kept safe are also in areas that have collapsed or unstable,'' said Proietti, who added that he was gathering a team of heritage experts from other regions to help salvage the works.

Elsewhere in the city, the cupola of the 17th-century Anime Sante church and the bell tower of L'Aquila's largest Renaissance church, San Bernardino da Siena, were also down.

The cupola of the 18th-century Baroque church of St Augustine collapsed, flattening the prefecture that held L'Aquila's state archives.

St Augustine was previously destroyed in an earthquake in 1703 and had to be rebuilt.

''Naturally there have been various collapses all over the city, with cornices, walls and pieces of roof often obstructing the streets,'' Proietti said.

More pictures of the devastation caused by the trembling earth can be found at the .

For a more detailed historical and scientific look at quakes in the Abruzzo region go .
Posted by Mrs B at 12:54 No comments:

Inertia is my homeboy 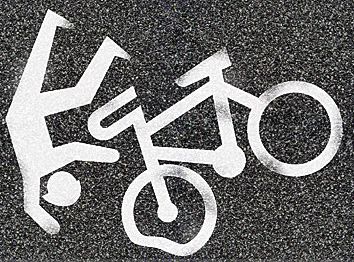 I've discovered I'm quite the little sadist when it comes to watching sporting events on the box.
The Malaysian Grand Prix made me come to that conclusion about myself. I was hoping for more rain so cars could skid off the track and make it just a tad more spectacular.
Same goes for cycling. A wet stretch of road is just grand. I remember when I was working at the Zolder race track during the about six years ago, that new layer of asphalt induced massive pile ups and when one guy fell, he took down a fair amount of the peloton with him.
Another example could be the Tour de France. I never watch that, except for the descent etappes if the Alps, or any other mountain ranges, are included. I just watch to see if one of those guys misses the turn and takes a massive dive into a ravine.
It could just be I associate the with pain. About seven years ago, on the same day the Ronde took place, I fell down a flight of stairs, banged my head on the floor and ended up with a mild concussion, a chipped tooth and a stitched eyebrow.
Football, that other boring sport, is only interesting when it's been raining for days on end, the field is covered in a thick fog or the ground frozen solid so the ball bounces the other way everyone least expected it to go.
Now rally and those kind of things are just silly. You just know they're gonna crash sooner or later. The suspense is missing.

Gravity rulez! Inertia is my homeboy!
Posted by Mrs B at 07:41 No comments:

A mound of wiki 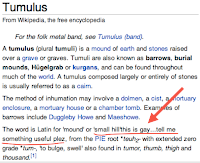 Ah, my favourite online encyclopedia makes me giggle once more.
After seeing a brief troll intervention on the 'Dinosaur' entry (see my ), some more gibberish found its way on the wikipedia-entry for 'Tumulus'.
Don't bother looking now, it has already been edited. Luckily Mrs B took a screen cap for all of you to smirk at! (click picture to enlarge)
Posted by Mrs B at 20:46 No comments: