Are we going to break the record today? Temperatures have been climbing. On Wednesday we had 31,1ºC, yesterday the mercury didn't make it past the 31,3ºC mark. Forecast says we might get 33ºC today. We've even had an ozon-alert.
Mouser is staying out all day, lying idle in the shade. Poor thing is shedding like mad. But with Dr Livingstone's lovely present (a nice bristle with pig hair) I can groom teh Kitteh.
I've put down little pots of fresh water everywhere outdoors, but Kitteh refuses to drink from it and prefers the yucky water in the bird bath. I refresh it every day, but the container looks dirty. 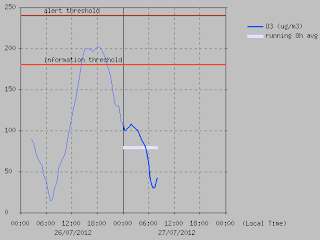 I'm indoors, all the windows and doors shut tight, working on my paper.
My professor keeps emailing me if I have already finished it and could I please send the bibliography and table of contents.
I did so and he replied: 'Wel, wel, that's looking pretty good.'
And then he returned the pdf with about ten comments. :/
Is he running low on summer reading or something? Maybe I gave him the impression that this paper is going to be the next best thing and he's got high expectations.

I will really try to finish it this weekend. I want to be ready to start studying for two more exams I have left in the next couple of weeks before I (finally) have my undergrad degree... \o/
Posted by Mrs B at 07:47 No comments:

Thomas the Unbelievable has a point 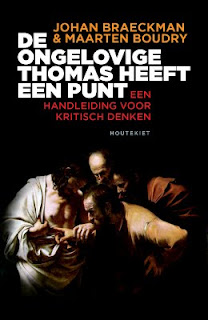 I'm currently reading a book I got as a present for my birthday from Dr Livingstone.
It's called: 'De ongelovige Thomas heeft een punt'.
Translated: Thomas the Unbelievable has a point.
It's a 'manual for critical thinking'.
Actually it goes through the very basics and explains logical fallacies, the tricks the brain plays on us like wishful thinking etc and how people use that to trick people.
Examples like the basketball-gorilla thing, a whole chapter on Randi debunking Geller, Houdini vs Conan Doyle etc.
Most of the stuff I already know through the SGU podcast. I haven't been listening for aaaages due to lack of time.
But some interesting things (so far) and some basic stuff I hadn't heard of like the hot hand fallacy.

They put up a website to illustrate some of the bits in the book. It's quite cool, it has all kinds of youtube movies, bits of lectures and so on grouped per chapter. 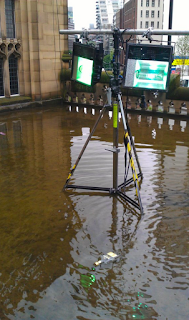 From tomorrow 'till 29th of July there is Dig the City @ Manchester. This is a picture from one of the roofs of Manchester Cathedral taken by someone setting up some lighting stuff for the festivities.

Looks like the drains are blocked. Probably the empty gin bottles and other rubbish found there are covering every possible water evacuation hole. I probably do not need to point out that this is detrimental to the building. And health in general.

Headless birds floating in the water.
I spy botulism....
Posted by Mrs B at 08:37 No comments:

I knew it all along. Elio Di Rupo, Belgian's Prime Minister, doesn't exist.
He has a flickr-page with pictures of him meeting and greeting people.
But according to his Flickr profile he has not given a real name.

Therefore he is a made-up character.
A figment of the imagination.
A ghost in the machine.
A creation of the media and the internet.

My life: an update

Tons of excuses.
I haz dem.

It's been a wild couple of months. I've been living according to following rhythm:
Sleep - get up - be amazing - sleep

Lot's of things have happened over here.
1) We had a digger in the garden to scrape away the paving around the house that was causing wet patches to emerge on the walls. It looks like a nuclear testing site now. They've not finished and they'll have to come back after their holidays.
We've worked out a scheme to remodel the garden. It will get rid of all the stupid things that have been planted by the people who lived here before and will reduce the maintenance work. 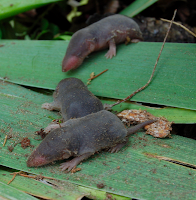 When the big digger was working in another part of the garden I heard little squeaky noises. I managed to trace the source: lo and behold: it was a little nest of mice!
They were entangled in a bush that had been removed. I replanted part of the bush and then covered them with some dry moss to shelter them from sun and Mouser.
Kitteh heard it too, but didn't seem to interested.
In the evening I did see mum or dad roaming around. The day after they were gone. This could mean two things: they were moved or they were eaten. The ground didn't look disturbed so I'm hoping for the former.

Anyway, I haven't been doing any weeding, raking or pruning as I thought they would clear away everything a little earlier.
It is now a complete and utter wilderness. It's very depressing.

2) We managed to find some people thought the intertubes that wanted to pay us to have the hideous electric blinds removed.
They needed to go because we're going to re-do the outer walls. So the ugly things have finally gone and we didn't have to do anything.

3) I finished up some exams in June, all went well, passed with flying colours. I'm still working on my paper. I managed to move the deadline forward. I need to take two exams in August/September because I wasn't able to take them the first time due to lack of time.
Work has been keeping Dr Livingstone and myself überbusy. With no time for fun and games.

4) We did manage to sneak away for two days. We visited the abbey of Himmerod in Germany.
I even bumped into a genuine Cistercian monk in the church, who greeted me on his way to prepare everything for mass.
It was a nice weekend full of Hefeweizenbeer, schnitzels and some very lovely abbey beer.
They're not trappists like the Cistercians here in Belgium, but they've got a trout farm, eco vegatables and honey.

5) The wasps nest in the spy hole in the front door had to be removed, alas. It was all hunky-dry when there was only four wasps there, building their little hive, minding their own business.
But then it was pretty warm for some weeks and I could see every hole was filled up with larvae.
Two weeks ago suddenly there were about twelve or more wasps there and every time I opened up the door they swarmed out protectively. But they were getting nervous and aggressive amongst themselves. So we decided to remove them.

6) We've got some gooseberries in the garden! Hurrah! Dr Livingstone: twenty of them in yoghurt would be very tasty. Alas the stalk is only yielding about ten berries at the moment. But still. The garden had brought forth something. Once the front has been cleared, I'm planting a whole row of the things. I want to walk through the garden and pick fruits of everything.
The cherry tree had some cherries on them, but most of them have been eaten by birds or the ones on them are not ripe yet. They do look a delicious kind of bright red already, but they were as sour as a lemon. 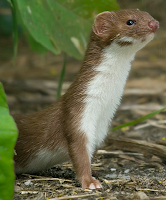 7) Mouser had some dealings with a weasel that it had brought in from god knows where. We managed to set it free two times so it could run away and escape. The darn thing didn't do much escaping. It just hid under a nearby bush and stayed put. We kept Mouser indoors for an hour or two, but once out it headed straight for the bush.

8) Our neighbour (the one who believes in UFO's) had been giving us lots of vegetables from his garden. We've been showered with salad, beetroot, fennel, some kind of cabbage, a couple of kilograms of big potatoes and a weekly box of freshly laid eggs.
We don't really know what to give him in return.

I'm not dead yet!

New posts are in the pipe-line!