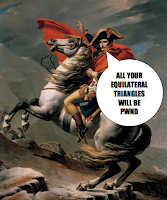 Yesterday my Professor of Philosophy pointed out that according to Hegel 1 + (-1) equals not zero but Napoleon.

I thought that was quite funny, I wonder if Napoleon would have liked the comparison.
I am referring to the little known fact Napoleon himself was a brilliant mathematician.
And having a theorem named after him and all that. It goes something like this: 'If equilateral triangles are erected externally on the sides of any triangle, their centers form an equilateral triangle.'