Heroine of the week: Kathryn Bennetts 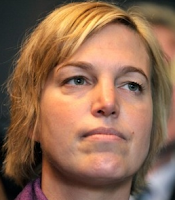 The woman we all love to hate, , is really screwing the country around again. Last week she gave an interview stating that a minister shouldn't actually know anything about Culture to run the department. "Je moet als minister van Cultuur geen cultuurkenner zijn. Een minister moet vooral goed beleid voeren"

Quod erat demonstrandum. It is plainly obvious she does not understand anything about Culture: She has announced a series of budget cuts (among many, many others also hitting environmental groups) and will put the Flemish Opera and the Royal Ballet of Flanders under one intendant.
.
"I do not want to live in a country with that kind of policies. This is an act of arrogance and ignorance. These plans are from a Minister of Culture whom I have never met and has never attended one of our performances. This is utterly shamefull for Flanders" dixit Bennetts in the papers. She had been with the Royal Ballet as artistic director since 2005. This is a very powerful signal. And one not te be ignored, or passed over lightly.

But, knowing Schauwvliege it'll just bounce off her and she'll just go: 'There is a crisis on, everyone needs to get by with less'.

If you hear how she's running (or not running) the Department (less subsidies, more own resources), doesn't that say enough about her non-capacity? The magical words: 'The sector needs to implement their own objectives from the bottom up' are just NewSpeak for 'I don't really know how to do it myself'.

When will the Flemish Minister President Kris Peeters grow some balls and end this catastrophe? Flanders is becoming the laughing stock of the international art world.
Posted by Mrs B at 08:13

She ,(the minister of nonsense) is an ignorant idiot in the true classical sense! SHAME ON THE GOVERNMENT!!!!! I think Rubens is turning in his grave.

I think Rubens must be spinning in his grave.