I decided to do some odd jobs around the house. I've cleaned the stables, weeded and cut some overgrowing greenery in its vicinity. Someone is coming to look at them, hope we can rent them out.
I've also mowed the lawn and a bit of the meadow behind it. And I've had to dig a bit so the fence opens up without too much difficulty. Mouser and Bonnie came and went to scrutinize my labour.

Now I'm sanding down some fugly doors. The people who lived here before us tended to favour dark brown over pretty much everything else as a colour. I dub it Granny Brown™. It's a very sombre colour and absorbs so much light. The rest of the house is more or less ok. Luckily they had it redecorated in whites and lighter shades, but the doors remained untouched and are dreary. It is a pity to remove them or paint them over in a light colour. 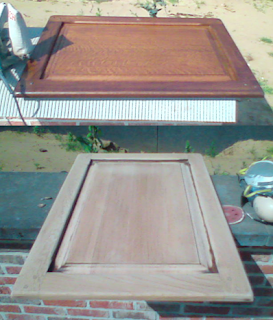 I examined them more closely, they're high quality oak.

So I decided to sand them down to their natural look and just give them a coat of non-colouring varnish. They're fairly easy to sand down on the streight bits. The little corners and bends are tedious and make my elbows go sore.
I've managed to machine-sand four little doors up till now and managed to finish one by hand-sanding.
It seems like this chore is never ever going to end. But I'll have to finish it no matter what. Don't want to be stuck with a mix-and-match closet. But the result is pretty amazing.
Some people remarked at how much better they looked already.
They could of course have said that to just to be polite. I hope they did it just to encourage me.
As I said, these are the small doors. There's four more and they're about 1.5 times longer.
Posted by Mrs B at 00:13