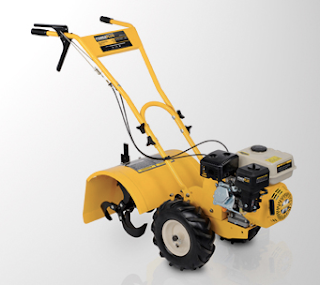 The garden is turning into absolute wilderness. Were there's supposed to be a lush, nicely trimmed lawn, there's weeds as far as the eye can see. The concrete borders are still absent and the guys who were going to do the lawn haven't been in touch.
Dr Livingstone had enough, we decided to go out and buy a tilling machine.
We rented one last year to break the ground, it was a heavy thing, weighing about 300kgs. This one is ideal for giving the area Dr Livingstone wants to have his veg patch on. It's only 70 kgs and handles much easier then that beast from last time.
It's going very well, Dr Livingstone is very pleased with it and he's been at it for an hour at a time as long as his back permits.
We've also made some crates to grow veg in from old pallets.
I'm chopping some up and adding some plank here and there. Dr Livingstone stapled some plastic lining on the inside and is now filling them with some dirt.
We're still working on the rest, but it's coming along nicely.
Posted by Mrs B at 08:17