The dove from above

Stuff always happens after I have finally decided to clean the windows.
It is an event, cleaning those windows but I finally managed to find a rapid, effective way to do them.
We've still got the moat running round the house and using a ladder has now been circumnavigated. I can get at the windows now with stuff mounted on poles.
Anyway, stuff always happens. Like heavy rainfall that puts streaks all over them. Or birds flying into the windows.
We used to have a lot of them flying into the conservatory, remember the big lovely Jay nursed by Dr Livingstone.
So this dove was no exception. 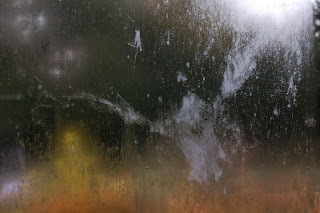 I didn't see it at first, but in the morning when the condensation was on the outside of the window, the imprint became quite apparent.
Caught in mid-flight. It's ghostlike appearance hovering in the line of sight.
It's on a window of the room where the administration gets done.
It's still there.
I might consider cleaning the windows again.
But twice in one month's time is a lot you know...