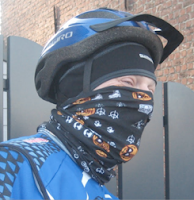 With our government on its arse as it is, Parliament has still passed, almost unanimously, a draft for the law of forbidding the wearing of clothing that obscures the face partially or totally (except on Carnival). Luckily it is not a law as of yet, the wording is very ambigious and it will be amended by the Senate. 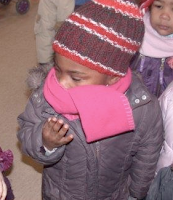 So it is not going to be turned into a law just yet.
We are going to have elections one way or the other in June anyway. But just supposing, for argument's sake, it would have been a law passed phrased as it was today, I would have been extremely worried. Why? 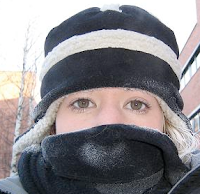 Because I'd never be able to go out in winter without risking a 15 to 25 euro fine (or a 1-7 day prison sentence). It's woolly scarf and bonnet for me pretty much from november 'till march.
So all the people in these pictures would be dirty rotten law breakers. I'd opt for the prison sentence. There's no room anyhow. Or you could just lift the prison door out of its hinges and walk out. Or charter a helicopter to fly you out. The possibilities are endless.
Posted by Mrs B at 00:19