I ain't gettin' on no plane, fool

Just got back from the . It was awesome. Just like last year. Nice weather and nice planes. Middle Teen™ went with me. She bought herself a model of a German Seaking helicopter. For those of you living close by: It is a fun day out. I'd recommend it to anyone. Grab camera, binoculars, kids and your anorak and grab a seat along the runway strip. The sights and sounds of these old timers roaring by is something beyond words. It is very well organised and the people from the Diest Aero Club are very nice and helpful.

Pilots are very keen to tell you all about their planes and if you ask nicely some will even take you up with them.
But too tired to write anything up on the whole day, so only some pictures including a very nicely kept 1943 called "The Old Crow".

Info on the event taken from the press kit:
Since Diest Aero Club organized the first fly-in in 1979, our Fly-In itself has also become an 'old timer' with a tradition of more than 20 years. History repeats itself at Schaffen airfield during this international meeting of Old Timer 'flying machines'. Once again we expect hundreds of old timer airplanes to arrive on the airfield of Schaffen-Diest. As usual, the main-day of the Fly-In will be on Saturday August 16th, when the majority of the airplanes arrive.

The first edition, in 1979, was looked upon with suspicion and disbelief. "Look at them, pilots and airplanes that barely can fly..." That first edition, 45 airplanes older than 25 years made it to Schaffen airfield. But year after year,the number of aircraft, vintage and modern alike, grew. New records were set, as the Fly-In of Schaffen became one of Europe's major light aviation events. In 1996, 405 aircraft landed at EBDT, and one year later, 449 aeroplanes set a record that still stands today. 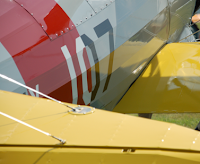 Due to the tragic accident on the Ostend Airshow in 1997, Diest Aero Club was no longer authorised to organize the fly-ins of 1997 and 1998. Our unique event was broken-winged for two years. Everybody was relieved, when the authorities finally agreed that a fly-in could not be compared with a traditional airshow.
So, after 2 years of involuntary interruption, 1999 meant a new start for the Fly-In in Schaffen.

Where do they all come from? Belgium, of course, but also France, Denmark, Germany, Sweden, Austria, Holland, Italy, Switzerland, England etc. The International Old Timer Fly-in is not an airshow, but a pleasant meeting of historical airplanes and their pilots. Some pilots are barely older than their airplanes, while others are young and passioned about restoring these planes in their original condition. 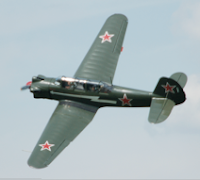 Something you can't see on the fly-in is the amount of hours, days, weeks, months, yes even years, of dedicated work that passed before, the wreck they found, became an airworthy plane. But here they are, shiny as new. If these airplanes could speak, you could hear long stories on how John, Otto, Michel, Karel, and the others, kept on trying to straighten that wing, looking for that last missing bolt, fixing the canopy etc. etc. just to get them airborne again. This is not a challenge, it's a passion, a way of life. And they are happy to meet all the others once a year at Schaffen airfield.

So what is a Fly-In ?
An airshow can be defined as a public exhibition, on the ground or in the air, by one or more airplanes, during which these airplanes evolve. So called aerobatics or demonstrations are being performed. During such exhibition a tight schedule and timing is applied.
An old timer fly-in however is a free meeting of old airplanes. There's no timing, no schedule and no aerobatics.

Though, simply because we take the safety aspect very serious, we will apply the same safety rules that are applied to airshows, without losing the specific characteristics of a fly-in.

Oh, and it has cars too. Middle Teen™ had to drag me away from a 1963 Aston Martin because I was dribbling all over it.

More on my day out straight from the horse's mouth at a later time...