The eyes of the Eifel 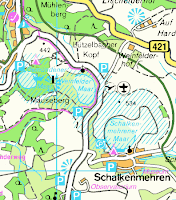 One of our favourite hiking spots in Europe is the in Germany.
We've come to appreciate this strange landscape and its wonderful wanderwege.

This region has everything a geologist could hope for if he should choose to go on vacation to get away from it all. It has minerals, bizarre rock formations, caldera, sparkling water, delicious food and Hefeweizen.

We decided, taking into account this could well be one of the last agreeable weekends before Fall manifests its true nature, to go and get some fresh air with the Teens™.
Two of them anyway. Eldest Teen™ has gone and dislocated her knee (again) by, according to her, tripping over her own feet.
/rolls eyes

First thing we did when we entered the Vulkaneifel Landeskreis was go to the shops and buy loads of . It's a thick egg based noodle only known in the German-speaking world. Dr Livingstone would sell his mother just to have a plate of the Swäbian speciality, so in keeping with the cross border shopping tradition of Belgians flocking to Luxemburg because of its well known virtue of cheap petrol or interesting banking system, the Dr and I just have to return home with a truckload of spätzle every time we are in the vicinity of the foodstuff.

First village we stopped for morning coffee had a main street that had had a very unappealing makeover, the obligatory castle ruin on the hilltop and the factory that saves the town from anonymity. The valley of the Kyll was shrouded in the dense fog and it was a bit nippy.
After drinking a Gerolsteiner Sprudel in -er- Gerolstein and a short, brisk walk over to the ruins of Burg Gerhardstein (built in 1115) we made it back to the car all in 20 minutes. The low mist was starting to evaporate when we left.

When we were walking along the rim of the Schalkenmehrener Maar we tried to con the Teens™ into thinking that the Eifel Tower was originally built in this region and then later transported to Paris for the World Exhibition. They almost fell for it. Only when Dr Livingstone asked: "Is this True or False?" they started thinking about what he had actually said and carefully tried: "I thought it was named after Mr Eifel".

The Schalkenmehrener Maar is part of the group. The info on the site is very interesting. It is only in German however. But hey, a little German hasn't done anyone any harm. Well, er, not in the last sixty years or so any way.

-sorry, had to go for the easy stereotypical German joke there-

These three lakes were formed by volcanic activities around 10,500 years ago. I say activities and not eruptions with a good reason. There were enormous gas explosions. Although that could have something to do with the sauerkraut.
There are advantages to having these craters. They make for excellent walking paths, stunning & rewarding views and dotted around the area there are numerous villages sporting spas. Even the Romans weren't misinformed and came there for the waters (geddit?). Digging is what they like down there so next to lots of pretty crystals and interesting looking rock formations some Roman villa remains have been found. A lot of info can be found on the site of the . It also has some cool links to sites that monitor volcano and quake activities.

On previous visits to this area we had seen a little white church, but no village, on the edge of the Weinfelder Lake. Or Totenmaar, Lake of the Dead, as it is known around these parts. It is an eerie name, and a very interesting history it has. The village that was originally there was abandoned during a plague infestation in the 16th century. The church still served the population in the area. In the beginning of the 19th century the bishop of Trier ordered the church to be demolished and the stones be reused for the betterment of the Schalkenmehrener Church. People rallied and were able to keep their church and restore it after years of neglect. Till this day people from the area still bury their dead in the cemetery.
In the picture painted by Fritz von Wille we can see the vegetation was held in check by sheep and why the place is called Totenmaar.

There are a good amount of clearly marked hiking and nordic walking -shudders- paths connecting the three lakes.

There is ample parking space (everywhere actually) so you can make your walk as long or short as you please. And here's Mrs B's golden tip for the full experience: go and make the climb up to the Dronketurm. from the 10,5 meter tower is awesome on a sunny day. If you're lucky (and brought your binoculars with you) you can see Trier.

is excellent to unwind after a tiring hike and:
1) drop unto a comfy chair on the sun-drenched patio
2) order a nice, big, foaming Paulaner
3) order a hearty meal to stock up on some much needed calories for the return trip
4) repeat #2 as often as needed.

once said of these lakes they were "The eyes of the Eifel" and I couldn't agree with her more.
Posted by Mrs B at 21:56