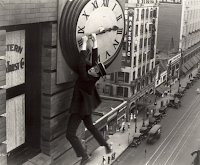 With the physical concepts associated with time and space are considered to be "absolute" and to flow "equably" (in Mr Newton's own words) for all observers.
Then Mr Einstein came along and defined to the observer.
A unit of is the amount of time it takes a photon to move Planck length (For those of you who don't know: The length at which the Schwarzschild radius and the Compton length are equal).
A New York Second is defined as the time between the light turning green and the cab driver behind you blowing his horn.

No matter how you define time, don't forget to change it on Sunday (If you live in Europe & Russia)! Or on Saturday evening before you go to bed.
Everyone gets to sleep an hour longer! I bet Mouser's routine will be all messed up, kitteh cat will now do everything an hour earlier. I've noticed the past year its habits have gradually shifted too. Velvet Claws used to wake me every morning at 5h20 sharp. But it's been sloping toward the twenty to six mark.

Our concept of time is based on the position of the sun. Normally it should be in zenith at 12 o'clock. On Saturday it's at it's highest point in the heavens at 13h26. Because of the added hour it will be 12h26 on Sunday, sneaking a bit closer to the ideal situation.

For astronomers Winter Time has an added advantage: we get to watch the stars a little earlier!