Let's go out for a Stroh Dr Livingstone and I went for a stroll in our frozen little country that has now turned into an enchanting winter landscape. We were well dressed for the occasion (three layers of clothing, a pair of binoculars and a flask of to keep warm during the walk).
On cold days like these we always have our warm alcohol with us. It makes us cheery, slightly light headed, gives us a false feeling of warmth and keeps us going until we reward ourselves with the next revitaillissement alcoholique en route. If I think of walks we did in the past our conversation never goes like "Remember we that time we saw .... and .... on a walk? Where was that again?"
Nope. It usually starts like this: "Remember when we took that flask of Jägertee with us and I spilt it. You know next to that river. When was that again?"

Anyway, we decided to curtail our escapade in the direction of . We are frequent visitors there; all year round the scenery looks different, but always equally stunning. It's Flanders largest natural lake and quite near to the medieval city of .

Mid 19th century the lake was pumped dry and Canadian poplars were planted there for the sake of making matchwood for the Union Allumetières. When no longer economically viable the scheme was abandoned. The Province of Brabant bought the land and has now again flooded the area and it is now a nature reserve. The still map the area before it was flooded again.There are long and winding wooden footpaths in between the reeds, water and rotting poplars. During spring the noise nesting birds make is fascinating. Although I wouldn’t recommend going there just after watching Hitchcock’s film (of same name) or you’ll be ducking and diving all the way.
As the waterbirds nest in the reeds and you can get quite close to them and really see the animals in their natural habitat.
Some bird spotting cabins are scattered across the area. The lookout tower is the best spot however.

You are surrounded by water and wildlife and the view is absolutely stunning, no matter in what direction you are gazing.
Last time we were there I even spotted a rare Alcedo atthis (). And we met a man who was strolling around with an owl on his arm. A half-year-old Bubo bubo () to be more precise. It had impressive big orange eyes and equally daunting looking claws. Dr Livingstone is a sucker for owls so that made his day.

The star gazing club Altair has a get together at the lake every third Saturday of the month, so on a clear night you can join them for some stargazing fun. I think there are still some plans on the table to have a sort of permanent observatory there. I've heard rumours of a 91cm optical telescope, a library and regular lectures. There is also talk of building a radio telescope.

In the visitor centre there is a permanent exhibition with interesting facts on all the different wildlife to be spotted around the area (kids from all ages will love it; including the big ones called Mrs B).
A free info booklet is available on the history of the lake, how the area was turned into a nature reserve again and all wild life to be spotted during the forest trail walks. En route there are several info signs on the eco system and animals to be found in the area you are traversing. There is even some science catching to be done, if you're a follower of the GPS craze.
Maps, binoculars, most stuff is available on loan for walks. 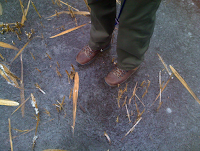 The Jägertee made me feel a little lighter on my feet but I don't think gravity agreed with me on that one.
But I was able to walk on the ice, albeit a bit apprehensive of not falling through it. It wasn't frozen solid in all places and some bits had cracked open. But we had a splendid walk, and I highly recommend going there.
Posted by Mrs B at 07:22