I enjoyed it thoroughly. Very well written, it stands head and shoulders above the previous publication I digested about the . And it was a better translation too (same publisher). Alas, on page 24 a humongous error appeared which caused all the hairs on my arms to stand upright. The kind of error Dutch people tend to make because they are inclined to write down words more phonetically and mispronounce them differently from us Flemings.
But the book itself it very balanced, has a broad scope and never gets tedious or dull at any stage. It captures some of the spirit of the times (including some 30's and 40's jokes).

I got it as a present for my birthday along with a book published in 1949 by who was involved in Van Meegeren's trial and gave evidence as an expert witness. It is called Van Meegeren's faked Vermeers and De Hooghs and I'm starting on that one today.
I will probably pick up another book written by Mr Dolnick. I believe he has written on the subject of the stolen The Scream by Edvard Munch.
Funny, as Dr Livingstone was staying in an Osloan hotel just across the road when the painting was in the unfortionate process of being nicked. 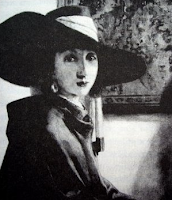 In January I heard a lecture given by Jonathan Lopez, also on Van Meegeren, in the National Gallery of Art (the lecture is available online via iTunes). He was introducing his book . He has a different approach to Van Meegeren. Dolnick concentrates more on the ultimate Göring dupe and the lead up to the arrest of Van Meegeren. Lopez talks about the other fakes (among others the ), the English connection, his nazi sympathies and more.
Posted by Mrs B at 08:01