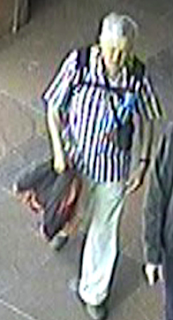 Today police have released CCTV footage showing the thief who boldly stole a powder horn in the new Antwerp city museum MAS on May 26th. It seems art theft investigation looks very inefficient and slow and does not seem to be a priority. Two weeks after the theft took place pictures of the culprit are distributed and they are appealing to the public to identify a man and a woman.
Also what puzzles me: the report in the paper mentions the thief walked up to the horn, removed it and then hides it under his jacket. He also had a back-pack. This begs the question, why are visitors not requested to leave their coats, bags etc. at the cloakroom?
Watch out for those OAP's, they could use their appearance to lull security guards into a false sense of security. This thieving eminence grise does not look like David Niven or Pierce Brosnan, but he's just as effective as the fictional characters they portray in features or Stéphane Breitwieser for that matter.
Posted by Mrs B at 16:20