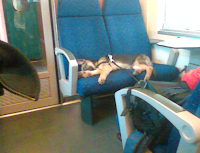 My grandmother is in hospital after a fall. She's having surgery on Monday to mend her hip. She was quite comfortable in hospitable, her leg in traction to keep the break nice and aligned for the surgeon to fix it.
I visited her Saturday, the train on the way there was packed with people.
All of them speaking different languages. The guy with the dog was talking Japanese on the phone, in front of me a Tunisian living in Brussels was speaking English with two Turkish girls studying marketing and engineering, behind me some Germans were either arguing or having a normal conversation (sounds alike in tone of voice to me). Across from me two Russians students, behind them Polish folk, and behind them very loud Spanish people.
They were all talking, everything went crescendo. It was very hard to concentrate on the reading material I had brought with me. If they were talking languages I can't understand, then I would have managed but I just gave up after 1,5 pages and nodded off. I slept the whole ride just up to the terminus.
The dog belonging to the Japanese guy was sprawled on two seats and seemed to be all relaxed and comfortable.
Right up until the train conductor janked him off.
Posted by Mrs B at 21:00