Belgium is no longer a country

It has been lingering in the foul smelling air for some time now, but as of this week it has been made official:
According to the message I got on youtube, Belgium is no longer a country.
And if it's on the internet it must be true. :-/ 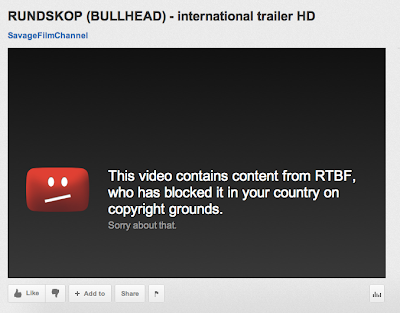 The RTBF (the French speaking community's broadcasting corporation) has blocked me from viewing a trailer for Rundskop because I live in the Flemish speaking part of Belgium. Which is according to the copyright restriction ... in another country. Ironically enough the film was financed with money from the Flemish, Brussels, Walloon and Dutch governments.
And it is an international trailer.

So does that mean the international film trailer will only be available in the Walloon part of the universe?

Reasons Greetings from a profoundly confused Belgian.
Posted by Mrs B at 12:09