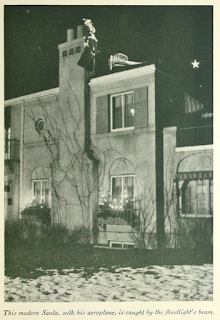 Hanging Santa's are not a thing of now, but are a thing of every decade. They've been around as a tacky Christmas decoration since at least the 1920's.
What's a Hanging Santa you may well ask? It's a doll dressed up in a Santa costume and pinned to one or other part of the roof or gutter to make it look like Santa himself was mucking about on top of your house.
I found a picture of one, accompanied by his airplane in a 1926 brochure by the National Lamp Works, the R&D department of the General Electric lighting company called Yuletide Lighting.
Looks like degenerate taste is embedded in our genes and will not go away for generations to come.
Posted by Mrs B at 07:24