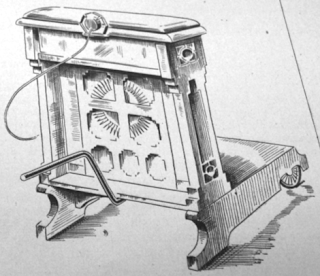 Modernity really kicked in during the 1930's in churches and hospitals/old folks homes run by brothers and sisters of various religious orders.

In Amsterdam, in the Gesticht van Liefde St Bernardus, a moving pulpit was used and rolled to the middle of the chapel to facilitate the (plentiful) elderly who were hard of hearing.
It was made of wood on a pedestal, placed on two rubber wheels and two supports at the front. At the sides there was an iron rod to prevent the thing from flipping over during the sermon and to easily move it about.
It measured 0,80 x 1,05 meters and was 1,4 meters tall.
A microphone could be secured at the front so speakers could be used in the back of the chapel, or in other parts of the hospital so those who could not get out of bed could hear the service.

Here's another crazy moving pulpit contrapion in Carlisle (UK).
Posted by Mrs B at 19:21