'Cept for the Pope maybe in Rome 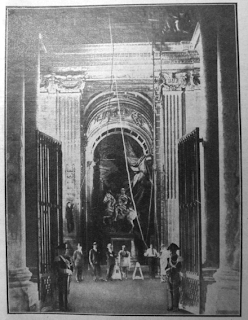 Another gem of a picture concerning the installation of telephone wires in the Belvedere in Vatican City in 1930.
My guess is this is at the Cortile or the beginning of the Galleria delle Statue. I think those iron gates are still there but I could be very wrong. I didn't find any pictures of the mounted figure on horse back behind the men posing for the picture, and there are stairs where (I think) the statue could have been.

According to the Vatican Telephone Service the first central telephone exchange, donated by the American Catholics in 1930, was installed in the Belvedere building and provided telephone services for approximately 360 end users; it remained in use until 1960 when it was replaced by a Pentaconta exchange with a capacity of 1,500 numbers later extended to 3,000. 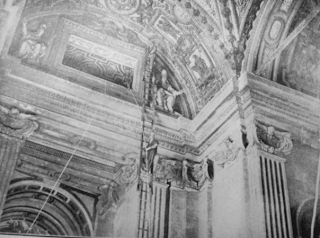 My source specificies there was approximately 80.000 meters of cable involved, connecting 400 telephone sets, but expandable up to 800. The telephone exchange was consecrated by the Pope on the 19th November 1930.
The Bell Telephone Rotary-system was state of the art at the time.
You could: 1) dial a direct phone set inside the Vatican
2) get a connection with any phone with only two numbers
3) get an automatic connection with someone in Rome by just dialling the number and adding a "0" in front for an external line
4) Answer calls from outside the Vatican at a post with 2 (!) seating areas and
5) priority for some telephone sets for emergencies and important calls. 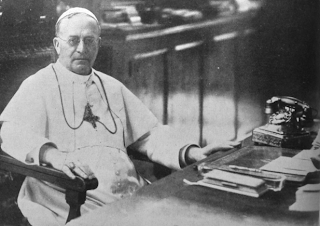 Which reminds me of a Jewish joke I read somewhere:
A leading Israeli Rabbi had a meeting with the Pope. While negotiating a papal visit to The Holy Land, the Rabbi noticed a distinctive red phone on the Pope’s desk.
The Rabbi asked what the phone was for. The Pope explained that it’s a direct line to God.
The Rabbi asked if he could test it, and the pope replied, “Of course, but you should leave one-hundred dollars for the call.” The Rabbi thanked him and used the phone.
A few months later, the Pope was visiting Israel as they had planned, and he made sure to make a stop to visit his new Rabbi friend. While talking, the Pope noticed a red phone on the Rabbi’s desk.
The Pope asked, “Is that what I think it is?”
The Rabbi said, “Of course.”
The Pope asked if he could test the phone, and the Rabbi said that he could but that he needed to leave fifty cents for the call.
The Pope was surprised: “You use my phone to God and I ask you to leave $100; but when I use your phone to God I am to leave only $0.50. Why is that?”
The Rabbi smiled, “From here it’s a local call.”
Posted by Mrs B at 07:47

valuable info and the pics are treasure for sure. great work :)

Thanks s.c.! More to follow as I leaf through the years of the journal I am processing.