It's been full speed ahead this week again, still struggling with a severe cold, but it is slowly clearing up. Last week I went to the garden centre and bought five insect hotels. They're supposed to house solitary bees, butterflies and ladybirds.
They're meant to be fixed at a hight between 1,5 and 2 meters and face a east-west direction.
We've put up three in the neighbourhood of the stables, one is in the car port and another one is going up in a tree.
After just two days we saw that a couple of holes of the hollow reeds were filled up nicely. Will post a picture once they're full up.
We're not exactly booked solid for the Easter holidays, but the weather isn't that great. It has been below 10ºC during the day and it might freeze at night, so all insects are not coming out to play. 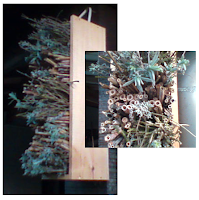 I did make one myself, cutting up some neighbourly bamboo shoots I cut down that were growing into our garden.
I stuffed them together with other bits of material lying around into a wooden wine box (which I was actually planning on making into a bird house). It has been up for nearly a month now and so far I have only seen spiders dangling from bits of twigs.
Dr Livingstone pointed out to me that the holes were actually to small to house any bees.
Meh.
Posted by Mrs B at 17:15

nice houses but I have never heard of insect houses before, well enjoy them let us know how it works out this summer with them. love the pictures, do take care.

I didn't know there were such things as Insect houses, me myself I like bird houses. well please let me know how the insect houses work this summer, do take care and happy Easter.