WW II is just around the corner, literally it seems. Let me take you back nearly 64 years and show you...

The of the USAAF was stationed at Sudbury, Suffolk. The group was reassigned from the 92nd to the 4th combat bombardment wing in November 1944 when things were about to turn even nastier on Mainland Europe. After the Norman invasion in June the advancing Allies had logistical problems. Supplies could not keep up with the pace of the advancement. There were no deep sea ports available, Antwerp harbour had not yet been cleared of German control. Allies had to put some mayor offensives on hold. Prime goal was to capture the Ruhr area, Germany's key industrial capacity. 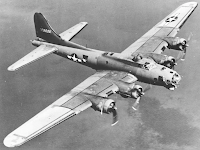 The was the first mass-produced heavy bomber with four engines. It was most widely used for daylight strategic bombing of military and industrial targets. On November 16, 1944 lt Rapp and his crew flying B17G DL 43-37985 partook in Their load was destined for the Düren area. Approximately 22,000 people lived in Düren at that time, and 3,000 of them died during this bombing raid. On the return run to Station 174 they got hit by German anti aircraft fire, which took out two of their engines. The crew bailed out from the aircraft, parachuting into friendly area of the 9th US Army. 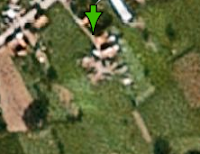 The stricken bomber however crashed into a farm, destroying the home, outbuildings and killing two women. A tiny, commemorative plaque is on the side of a building close to the main road. It is one of three buildings still standing after the crash.The green arrow points at the third house, further down is the crash site. The perspex commemorator is hardly visible, good old curiosity compelled me to cross the road and take a look at it.

Today, North East of Sudbury hardly anything is left of AAF Station 174. It was decommissioned in 1945. Arial shots from when the base was and 's satellite image, we still see of the runways, most buildings have been demolished. A small patch of green strip is still being used today by an aero club.
Loss of human life always is a tragedy, but the lives of two civilians is in stark contrast to the annihilation of thousands of lives the bomber was being part of just an hour or so earlier. I think we should commemorate that too and add a few lines to the ornamental tablet.
Posted by Mrs B at 10:55