Sisyphus has an easy job 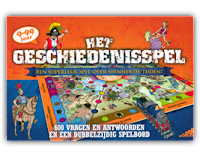 Getting history wrong or being ignorant of historical facts is a bit of a pet peeve for me and the Dr. We have been trying, at every given opportunity (and for a very long time) to make up for the lack of instruction The Teens™ have received (or not as is the case) on this and other areas.
Edit: -ignore the brackets; double negation counters my own point-
The insufficient acquaintance with the things mentioned above spurred me to inflict a little coercive persuasion upon them. Slight and subtle. How to go about this impossible task in a sly and cunning fashion?
A while ago I bought a history board game. An easy one. Trivial Pursuit is too difficult for them, I usually always win and they hardly get any questions right. Even after pitching them several hints, it's just no use. So the questions of this board game have been derived from history lessons given in primary schools (10-12 year olds). Subjects vary from prehistory to modern times. The Teens™ are well above those ages. So one would think they would get almost all of the questions. Just a few mishaps:
Eldest Teen™ does not know in what year Columbus discovered America (well actually landed on ). And she thought the reason why the Americans entered WW II was the bombing of New York.
*facepalm*
Middle Teen™ does not know the Eastern Roman Empire is also know as Byzantium, let alone there were two Empires. It is even more distressing when you know she is currently in her 3rd year of Latin and her memory is completely void of these basics.
*facepalm*
Youngest Teen™ is not participating in our little mind re-education project. She sits with us in the room and sneers some remarks if her sisters get the answers wrong.
Even when playing the game a few days in a row and getting the same questions over and over again they still don't know. Nothing sticks. It is all rather depressing. Alas, alas. Sisyphus has to continue eternally. I think the education where they live is very insufficient. Even the geography lessons resemble a bad joke from a Christmas cracker. They are hardly able to name countries of the European Union and their capitals. Let alone any other countries. Or just simply situate them on a continent.
Education standards in the North of the country are far better than the southern part, at least at the secondary level. Kudos to the southern universities for supplying most of the Nobel prize laureates. Why is there such a huge difference? Ever since education was federalized in '88 it has been very dramatic.

"The life-history of the individual is first and foremost an accommodation to the patterns and standards traditionally handed down in his community. From the moment of his birth, the customs into which he is born shape his experience and behaviour. By the time he can talk, he is the little creature of his culture, and by the time he is grown and able to take part in its activities, its habits are his habits, its beliefs are his beliefs, its impossibilities his impossibilities" R. Benedict, Patterns of Culture. Boston, 1961

So hard luck to them, they live on the wrong side of the border.
*facepalm and minute of silence* 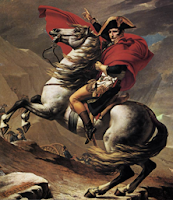 Remedying it with these playful band aides on the gangrenous wound of general knowledge is just to no avail. Without support and encouragement from their huge whale omelet of a mother it will, sadly, remain status quo. Unfortunately they are currently having to put up with Dr Livingstone and a historian in the making. Better known to them in the affectionate terms 'a whining pain in the ass'.

But I did achieve something. Although I should classify it under Pyrrhic victory. I told Middle Teen™ Napoleon made her lose the game. She actually asked me when he was born (1769), when he seized power (1799), when he was banished to Elba (1814) and when he got a good bashing from the Duke of Wellesley. Armed with these facts she is repeating them aloud so she can memorise them in time for our next game. Anyone for a round of Waterloo?
Posted by Mrs B at 14:10