As you may have deduced by now, I am a prolific reader and notorious horder of books. Dr Livingstone will testify to this fact. A small portion of my catalog has already found its way to the internet and is there for all of you to see. Just click on my LibraryThing sidebar on the right to go to my online library. I don't entirely know if my insurance is quite happy with all that paper being stored in the house.

Now I know bookburning is no longer en vogue and I would be the last person on earth to promote biblioclasm, but I have finally found a book that, if the chance of entrusting a volume to the flames presented itself to me, I'd fling it in without any hesitation whatsoever.
Anyway, I came home from my summer film school earlier this week (will blog about that some time in the future) and found a book that my mother in law had given the Teens™.
It's a Dutch book written by Aaf Brandt Corstius and Machteld van Gelder. It is called Handbook voor de Moderne Vrouw.
It is beyond a shadow of a doubt a collection of the worst load of cobblers and headless chicken-ramblings I have ever read. 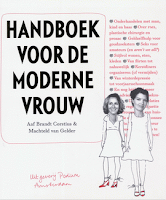 A quick glance at some of the entries is all one needs to be convinced. It is just so wrong in every aspect of its wording, message and presumptions .
Its outset is to give the Modern Woman some kind of guideline to find her way around today's society.
Even if it were written tongue-in-cheek (and believe you me it is nothing of the sort) it would still amount to being 445 pages of pure, unadulterated drivel.
It is a plethora of poppycock all these glossy wimmins mags print up. I'll give some off-the-cuff translations, a handfull of uncut gems of absolute rubbish.

p 17: Of course, it could well be he earns less money, isn't as brilliant as you or not as beautiful. That is not at all lousy, as long as he is absolutely brilliant in other areas.

p 25: A couple of years ago the standard on flirting was published. The Rules. and others have dedicated a lot of shows to it, so you will undoubtedly remember it.

p 118: Babies have an enormous sucking reflex. Rumour has it that if you'd get up, the baby could keep hanging on to your nipple just by the power of its mouth alone.

p 191: Anyone with an inferiority complex about her features and appearance and a small budget can try and manage this complex by using plastic surgery.

p 206: On how to combat a winter depression: Wallow in it! Stay at home. No one will force you to go outside, as is always the case in summer. No terraces, no parades and rosé-drenched barbecuehappenings. Just stay inside with the telly on. A huge pile of DVD's, a tub of pop corn and a tub of Ben & Jerry's ice cream. Because that cursed bikini-diet only has to start at the end of May.

To top it off the codswallop is very unnuanced and totally geared towards desperate housewives who're already familiar with this kind of nonsense from day time tv shows (I gather Oprah being one of them) and will just see all that twaddle being reaffirmed.

Oh and too bad if you're a lesbian. You'll be shunned by Modern Women reading this patronizing book who gobble up every word in it. Or you'll be revered as just being the epitomy of playing hard to get. (Oh yes! p 26). And modern women being ... er ... heterosexual women with children married to men who are able to support them financially who have the right to a personal shopper.

I think I'll have to have a word with my mother in law. Giving the Teens™ a book riddled with pseudo science and praising quacks as sensible people is not the best way forward. Not for Modern Women. Not even for mankind in general.
Posted by Mrs B at 07:39