On the 4th of July I curtailed my sight seeing activities, sallied forth and headed toward Kensal Green Cemetery. Not to negotiate the vending of some cheesy comestibles, but had their annual Open Day.
The oppressive heat of the previous days had waned, the temperature was most agreeable.
It had been well over a decade since I last visited Kensal Green and from what I could vaguely recall, it looked very different indeed.
Last time I entered from the North Gate, this time I entered through the main entrance at Harrow Road.
There was not much activity on this side of the necropolis, so I walked towards the Anglican Chapel.

The first glance of Open Day activities I caught was a vintage Ford hearse. The very same one as used in the straight to DVD 2009 horror spoof .
There was a coffin placed at the end of it, the boot was open. A stuffed crow was tied to the roof. Nice detail.
There was a good crowd gathered outside the Anglican Chapel, I’d just missed Louis Theroux opening the festivities. 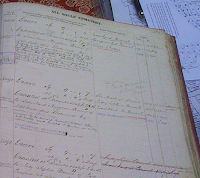 I got talking with the Chairman of the Friends who showed interested visitors the entry page in the original 19th century Company Register for the plot.

He introduced me to a gentleman who was a Byron expert.
I asked him why Byron had become so unpopular and people tended to take more of an interest in his biography than his work.
‘People today don’t want to put any effort into reading him’ he explained ‘Byron is a lot of hard work and they can’t seem to be bothered anymore’. , one of his mistresses is however. I believe she is buried in the catacombs.
‘Ah, it would be very interesting to open up the coffin of Byron. How wonderful it must be to gaze upon the face of Agamemnon again.’ continued the gentleman.
Then he went on to complain about how the Times had really gone downhill the last couple of years and went off to eye some Goths dressed in Victorian mourning clothes.
More poetry ensued when a fresh faced young man recited some excellent Shelley and G.B. Shaw.

Later on I strolled over to the plot where Harold Pinter was laid to rest last December, just behind the massive memorial monument to the famous Harley Street Quack . There is talk of putting up a memorial for Mr Pinter, but it is early days yet. For now the burial site is marked with a simple shiny metal plaque.

I resolved to have a cup of coffee and eat some delicious chocolate sponge cake before going on any of the tours.
Around midday I joined a guided tour along the cemetery with a very nice guide who couldn’t think of the words ‘’. Of course I couldn’t resist helping him out a little. It was a very informative walk and talk. The gentleman spoke on the Cemetery’s history, the people who were buried there, the Victorian customs of dealing with death, how the plots are kept,…

I had just finished Catherine Arnold’s book , so this was a nice intermezzo before I start with James Stevens Curl’s and Pat Jalland’s . Both books have been staring at me for a couple of weeks now and are screaming blue murder to have me turn their pages.
Our guide had to speed up his talk, it was only supposed to last about an hour, I had to hurry back to the Anglican Chapel because my Catacombs Tour started at two.

The Catacombs: very special indeed. It was everything I expected it to be. Dark, moist, unhealthy air, nooks and crannies filled up with coffins from ground to ceiling.
By the time I emerged from the vaults it had gone three and I resumed my stroll, by now my back playing up so much I had to lean on my cane.

I conversed with a gentleman who was chiselling some words into a slate slab. I asked him about the various building materials used on the cemetery, he pointed me to an interesting chapter in a publication by The Friends written by Eric Robinson on the geology of Kensal Green Cemetary.
A steal at only 20 quid, I couldn’t resist.
I had enquired where the grave of Wilkie Collins was, he offered to accompany me to it, he knew its exact location. Or so he thought. It is so inconspicuous one cannot find it. I must have passed right by it, when I looked it up it was in the vicinity of the place the engraver thought it would be.
Around five-ish I decided to head back to the Tube and call it a day. My weary legs no longer able to carry me.
I got back to my hotel and watched someone else do the running. Ladies singles final at Wimbledon.
Posted by Mrs B at 08:28