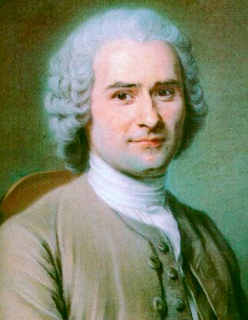 When I was about twelve I had a huge crush on Jean Jaques Rousseau.
Kind of strange to have a crush on an 18th century philosopher, but there was a portrait of him in my history textbook which caught my attention.
Which is probably what also happened to all the ladies two centuries ago when they saw a picture of this notorious author with his scandalous book(s).
Mind you, he did have some stiff competition from James Woods, Aidan Quinn and Kenneth Branagh.
I was so smitten with J.J. by the time I turned thirteen I had read Julie ou la Nouvelle Héloïse, Emile ou de l’éducation and le Contrat Social.
But then my fancy turned to other authors and J.J. fell out of favour.

I was in my Architectural Theory class on Friday when the subject turned to authenticity in architecture and the subject started with the theme of 'Exodus out of the culture of falseness'. Three minutes in and lo and behold: who appeared on the screen?
Mr Rousseau himself, with that seductive smile and those dreamy eyes of his!
Posted by Mrs B at 00:33