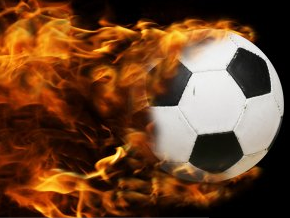 Ah, yes, I've not talked about all the superstition in sports before.
A lot of players have 'rituals' they do before their games. Not just preparing or psyching themselves up for a match. No, they actually have to do the exact same things every time. This is where the special pleading comes in. If they lose, they can sort of blame it on the ritual.

This a posteriori woo woo has now disguised itself in the form of some 'high tech'-accoutrement athletes need to wear to enhance their performance. And we're not talking about Lazer swimsuits or Blade Runners here.

According to an article in , that well know source for reliable, interesting and solid reporting, (infuse this comment with a pinch of sarcasm), two Dutch brothers have been conning pro's with a scam so ludicrous even a baboon would see right through it.

According to the article written by Johan van den Dongen, they have managed to secure a 200,000 € deal with a Greek football club so they can have the privilege of training in the jacket for ten days.
Red flag nº 1: 200K?

So what are they selling? According to the product description: Some kind of jacket that contains minerals that filter IR from sunlight and then beams it through to the body. The vibrating and rotary effects of this radiation would stimulate blood circulation what would lead to a better aerobe intake and a quicker deposit of lactic acid and other waste.
Red flag nº 2: techno babble

Of course they have no scientific data or studies to back up their claims.
All the evidence they provide is purely anecdotal as usually is the case, by using testimonials.
Red flag nº 3

Alas every single online news outlet, even the Dutch U2 fanclub, have copy-pasted it into their news feeds.
"Ook U2-drummer Larry Mullen mocht er een concert lang aan ruiken." To bad the U2 concerts are in the evenings when the sun has already set. And the IR radiation coming from the gas discharge MSR Gold™ FastFits in the lighting units won't be giving off much either.

It is pathetic, it's not even a good scam. But if you can find the gullible idiot that fits the shoe, so be it.

Maybe the Panathinaikos players left the magic jackets out on the field after their training session and the InfraRed radiation started the huge fires that are grilling Athens right now...
Posted by Mrs B at 10:12