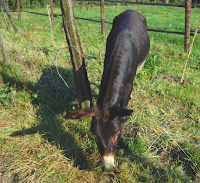 Well, it finally happened. The animals in the field had an extra curricular activity shall we say. One of the donkeys used the hole in the fence to seek out some greener pastures.
I was standing by with a camera, just in case it would wreak havoc. But it didn't. The Steve McQueen donkey™ couldn't consolidate its escape to the fullest, I think Mr Disastrous Farmer™ saw it and under an hour all the donkeys were put in another field where the fences are in a less deplorable situation then the ones bordering on our drive way and garden. 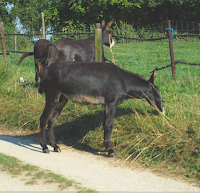 In any case, he still hasn't mended the rest of the enclosure. He knows if it happens again he'll be in big trouble.
I gather he's not on speaking terms with us anymore since we called the council to have the horse removed.
I really cracked up yesterday when we drove past his house and his letter box was on the ground too.
Posted by Mrs B at 10:16