The Sack of The Big Apple 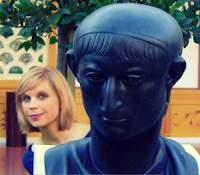 I listen to 's lectures. She teaches a at .
But I cannot believe the analogies and the comparisons she sometimes uses in her . Take the lecture on Greek Art for example About 55 minutes into her talk she is describing battle scenes with Centaurs and Greeks from the Archaic and Classical Period and is placing them in social and political context:

"They were able to overcome an opponent, who was almost as strong as they were. And even in some cases might have been even stronger. And again we have to bear in mind, always, that story of the Persian War, that Athens actually fell to Persia. Athens was invaded by the Persians. This was a Greek September 11th, their city was destroyed. Nevertheless, the Athenians were able to overcome that, to push the Persians out. That aspect of tension is something that makes story telling in Greek Architectural sculpture always very interesting and surprising."

She compares the sacking of Athens by the Persians during the Persian War to ... 9/11.
How's that for non-relevance. Just a few quick points here:

-The USA had not been invaded nor subjected to rule from another empire prior to the attack.
-The city of New York was not sacked, and not twice in ten years time either. The attack on the Twin Towers does not amount to a sack (plunder, rape, overall destruction, enslaving, carrying off riches) of a city state.
-The Persians ran into a lot of trouble and a harsh Greek Winter turned the tables on them.
-A terrorist attack differs enormously (as in day and night) from an army advancing on homeland.

If she were making the analogy for the sake of a materialistic destruction scale, she could have chosen a better example. The skin of history only stretches that far. I could kinda see where she would take the 9/11 comparison as an impression left on the minds of the peoples, but nevertheless I still feel it has been chosen very poorly, especially from an academic perspective.

Now let me compare something.
I believe Professor Tronchin IS Joan Rivers. We just haven't been told yet. Now there's a turn up for the books eh?
Posted by Mrs B at 10:24