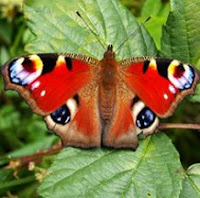 Trust me to go cycling on the day all flies and winged insectivore-like things come alive and take to the skies. And I didn't have any sunglasses with me. So I could only peddle along looking sideways, down or squinting my eyes. And keep my mouth shut. I don't like having my extra bit of protein administered in the form of a bug. Trust me to, on one of the first sunny days of spring, see a Peacock butterfly (Inachis Io), fresh out of hibernation, and squish it under my front tyre. I didn't do it on purpose. I was working my way up an extremely steep climb, had just conquered the hill, and all of a sudden the ruddy insect gently fluttered right in front of my bike and set itself down. I swerved to avoid it (in a Danneels-on-Claus sense), but to no avail. Its wings were open. It's quite large when unfolded. I'd say about 5 cms. That's nearly the width of my wheel.
A bit further down the road a very nasty looking terrier was observing me from a distance. As I neared it hid behind a tacky looking letterbox. And then it lashed out. Luckily I was peddling along in a low gear and managed to get away from the beast as quick as I could. Alas the ruddy poo factory could outrun me and nearly sank its teeth into my trouser. The owner should have a rabies shot. 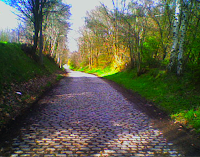 But I misinterpreted the map. Instead of relaxing and whizzing down what, in my imagination resembled a ski jump slope, turned out to be a huge motivation killer. I had to do the decent thing and had a very steep ascent of 30 meters up spread out over just 400 meters. And not on a road. Only mud and some remnants of what looked like ground brick.
When I nearly hit the 18km mark I wanted to go home. I know where I was at the time an I knew a short cut, not on the map. I had driven over it many a time before. In a car. How steep it was, and how utterly milk shaky it felt! Again, battling with gravity, being shaken like a James Bond martini, but I made it. I could hear the drinks cabinet hailing me already. Just had to pass the dreaded crossing.

I call it the 'stupidity-test-crossing'. It is a T-shaped crossing. In the middle there is a kind of a lowered cobblestone triangle. It allows for a division of the road and can still let farming vehicles pass over it (They had to amend it the first time round. It was too high. Tee Hee. Trucks and buses couldn't make the turn). To the right are two lanes. One for turning right and another return lane. A third lane is only for cars coming from the other street and turning right there. The blue and green lines indicate a correct way of turning into the street. The red line shows the little detour all the idiots make. This has been bugging me ever since they redid the road last year. I cannot begin to count the number of times I have seen people take the red line trajectory.
Posted by Mrs B at 15:18