Napoleon has humbugged me!

As mentioned in a turned out to be the Middle Teen™ nemesis. To add some colour to our little history-pestering-rants we decided on another brain-feeding excursion with her. So to Waterloo! On the webbers I read there'd be artillery demonstrations. I thought those had been restricted because the Lion's Mound was becoming unstable due to the vibrations of canon fire. But I can't find any confirmation anywhere reliable. Just some newspaper clipping from 1999. And it's been well over ten years since I remember hearing about that. It has become obvious that recent history does not exist if it is not on the internet. Urban legend rumour has it. Or it could have been an old April Fools joke?

Not a lot of people about, but then again it was pissing down, with very cold gusts of wind.
I wanted to count the steps while ascending, but lost count half way. When I stopped to take a picture I forgot the number I'd reached. But I looked it up and it's 226 steps before you get to the cast iron lion. It's facing France. So this is the equivalent of giving a nation the finger about two hundred years ago. Sacre blue!

It must be a spectacular view from up there if they do the battle re-enactments. And very informative to see all the troop movements. Warfare then was more comparable to a chess game. 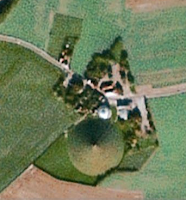 The Mound was built on the spot where, allegedly, the Prince of Orange got wounded during the battle. The exact facts will be enveloped by the shrouds of history but there are two stories as to how the Prince left the battle field. Both of them on a litter. Story #1 says his horse got shot from under him, he then took a bullet in the shoulder and was carried off on an old door from a nearby barn. Story #2 says he merely fainted and had to be carried off. So not a glorious exit. We can see which sides both stories are coming from. But dad was pretty proud of his son and erected the Lion.
Funnily enough, when viewed from a satellite it looks like a breast with an erect nipple. Click picture to enhance (yes, that pun is intended).

Next to the mammiform landmark there is a panorama. It is one of a handful surviving in Europe today. Panoramas were very popular during the 19th century. is a unique example of one. I will dedicate an entire post on painted panorama's later on. The panorama in Waterloo is in very poor shape. They are currently redoing the façade and are giving the roof a once over too. Inside things are an abomination. The painting is affected by water stains in several places. It is in very poor taste to let such a work go to waste. The yearly income this landmark rakes in could be put to good use to help preserve this panorama. Not just for the sake it being attached to Waterloo because it depicts the battle, but of the importance of it being a unique monument.

Some chaps in historical uniforms were pottering about at the foot of the Hill. They represented soldiers from the They had a little cannon they fired with half a charge and without a cannon ball. Apparently it took 8 men to fire a canon. Well, six actually and two in charge of the charges.

But the French, apparently, still have not digested this defeat. The only come back ze costumed sergeant gave me was: 'But we did win in '. He also told me they were planning on removing the lion from its socle and put the Imperial eagle in its rightful place. And then he got lost in his own chuckles. But to put it in 's words as he could have told Napoleon on the eve of the battle:
"When a man soils a Wellington he puts his foot in it. Yours with sincere apologies for your impending violent slaughter, Arthur Wellesey, Duke of Wellington."

But it does look like Old Bony did win here as the vivid memories of the conflicts have waned. The souvenir shop in the basement of the Panorama displays nothing but Napoleon stuff. From the commemorative tankard to the small imitation bronze statuette and the tea towels. No mention of the victors anywhere. So he's back. With a vengeance.

For some good podcasts on Napoleonic history or indeed the battle of Waterloo check out Professor Bob Packett's and the 's.