A scolding from The Past 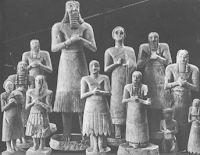 I've had a horrible night. Haven't slept very well.
Currently I am studying for my exam on Mesopotamian Art. There are a lot of different periods, each of them have significant traits. Just like you would for instance tell a Renaissance and a Baroque painting apart based on differences in subject, style, etc. there are ways of distinguishing between e.g. Old Akkadian dynasty and Neo-Sumerian periods. So I'm immersing myself in architecture, pottery, relief carvings, sculpture,... the works.
Yesterday I was delving deeper into sculpture dating from the Neolithicum to the Ur III period. And guess what? Some statuettes ended up in my dream. They were telling me I kept putting them in the Uruk period, when clearly they were Early Dynastic. So I promised them I'd take another look at them today. When I said I didn't know they were from Tell Asmar because they hadn't told me, they reacted as if they were insulted to no end. "Ignorance is no excuse. You could come see us in the museum."
How's that for a warning from the past? It was horrible, I didn't sleep a wink. The little figurines scare the hell out of me. What with those big, inlaid eyes. Just staring.
Archaeologists have thought these objects served the purpose of depicting the eternity of the presence of the 'adorant' in the temple with their perpetual prayers for the god. Their gaze fixed on the deity, hands folded across the chest. Men usually are bear-torsoed, with a woolly frock. Woman have a sort of cape, draped across their body but always leaving the right shoulder uncovered (except the early statuette found in the Diyala river from the Uruk period whose upper bodies are left uncovered).
And another thing. What the statuettes clearly didn't know is that they are no longer on display at the museum. It has been almost five years now since it was plundered. I am talking about the Iraq Museum in Bagdad. Over on , you get a very good idea how bad it was and still is if you select . He has some excellent links to articles, papers, research and world wide policy.
I still hope I shall be able to visit the Museum when it is reopened. Let me rephrase that. IF it is reopened. But I cannot say I will have the opportunity in my lifetime as the situation look very bleak right now. I know this does all sound very pessimistic, but it is a tragedy for all humankind to lose its heritage. All I can do now is see the collection online as it once was. The Oriental Institute in Chicago has an extensive database on the . If you go to the you can see it is as empty as all display cases are now.

And what on earth has happened to the Bagdad Museum Project? Where is John Simmons and the alleged is available as a domain name. Any takers?

Anyway, I did keep my promise to the statuettes, where ever they may be. I hope I sleep better tonight.
Posted by Mrs B at 10:07