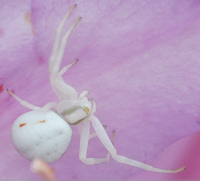 I have on of the coolest spiders in my garden. Misumena vatia, or Flower Spider as it is commonly known. It does not make a web but pounces on pollinating insects visiting flowers. It strikes by injecting venom.
But that is not the coolest bit about them.
It is able to change colour to match the flower it is sitting upon! How's that for extremely impressive?


From Wiki:
"The color change is made possible by secreting a liquid yellow pigment into the outer cell layer of the body. On a white base, this pigment is transported into lower layers, so that inner glands, filled with white guanine, become visible. If the spider dwells longer on a white plant, the yellow pigment is often excreted. It will then take the spider much longer to change to yellow, because it will have to produce the yellow pigment first. The color change is induced by visual feedback; spiders with painted eyes were found to have lost this ability.
The color change from white to yellow takes between 10 to 25 days, the reverse about six days."


Okay, it can only change from yellow to white and vice versa. But that still is pretty mind-blowing. How about those little 8 legged chemical factories, ladies and gentlemen.
Posted by Mrs B at 16:40

pick it up and put it on a yellow flower and see what happens... :-)
grtz

Hi shrink,
Thanks for posting. That was actually the first thing that popped into my evil, meddling head when I read about the colour shifting. :-)
I guess I could do that but there are a few thoughts:
1) The only yellow flowers in my garden are buttercups. I think the spider is just a tad too big for those. Seems to me it likes a bit of stelth, having some place to hide would be a big plus for the little creature. And seeing the albino shade it is sporting now, I think it would stand out like a vegan at a cannibals' stag night.
2) According to arachnologists (I'm not one of them, obviously) it takes about 10 to 25 days before it actually starts changing colour again. And frankly, I don't think it'll stay on there that long (nor will I remember to got and check).
Yes, that's right, I'm the one that put the 'A' in lazy.
3) I could keep it in a box with some yellow paper and see how that turns out. But a slight practical problem presents itself yet again: I'll have to feed it to keep it alive. I'm the kind of person who even forgets about watering plants. (That's not the lazy part of me, plants just don't make any noises, so I tend to forget about them).

But shrink, if you're volunteering, I could arrange the spider to be shipped to you. I'm sure it would make an interesting fortnighly pet.