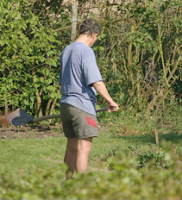 Pop quiz:
In this picture is my neighbour:
a) scooping dog turds from his lawn.
b) punishing naughty grass that won't grow in the right direction.
c) trying to whack some sense into garden animals.
d) unable to move because his hernia is playing up again.
e) all of the above

Time's up. The correct answer was: c. I've never seen the logic in wielding a spade, waiting for the mole to come up and then do whatever is intended.
Our lawn looks like the Pyrenees according to Dr Livingstone. It was very bad at the time, but I couldn't spring into action because I was still recuperating from . Not a mole, but burrows to the same effect.
So we've been free of unwanted re-landscaping for quite a while now. Except in the front lawn. There are new heaps there since yesterday.

I'm not an early riser, except if... No, I'm not an early riser.
I thought they only were active roughly taken around dusk and around dawn. Seeing it's nearly ten I'd say there's not a lot of chance he'll have success.
He was standing very still for, oh let's say, a fair ten minutes (yes I did watch him, I even had time to make myself some coffee and get the old camera out). And then suddenly,...
he started digging very ferociously. After three of four digs he stopped. I don't know what the idea was, but I bet the mole is much quicker going back down than him trying to get after it with that crude garden implement. If I were really out to exterminate the little mammal I'd put traps. They're very effective if placed correctly over the animal's dwelling/corridor. Dr Livingstone won't have any of that. We've got one of those plastic sticks with batteries in them that make those annoying bleep sounds. Only works for a very small range. And if you're in the garden at night when all the birds have gone quiet you can still hear that annoying subterranean buzzing.

will probably have a good old pray before he rolls into bed tonight. If he gets any. Moles that is.
Posted by Mrs B at 10:01