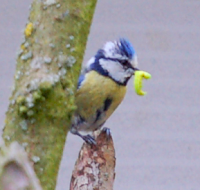 A nest of Cyanistes caeruleus, or commonly known as Blue Tits, have taken up residence in the rafters of the pear refrigerator bordering on our garden.
I had heard all the twittering, but it sounded so fragile and I couldn't quite figure out where it was coming from. So I decided on a stakeout with my camera. Within minutes there was a little, jumpy bird looking at me, giving me and a little caterpillar firmly locked in its beak. Before it fluttered off, I managed to catch it on camera, I wanted to get a snap of it while entering the little hole next to the rafter, but even at a very fast shutter speed it still looks like a colourful blur.
Funny how every picture I take of the species, it always has those blue feathers standing up. It reminds me of the way Captain Haddock looks when he's all dressed up and his hair is parted all comely.

UPDATE: I've added this little picture I took just a few minutes ago. Finally cought the flying feeder on camera!
Posted by Mrs B at 10:24