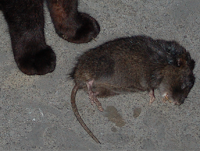 Mouser has been playing good kitty today. It just showed up on the kitchen doorstep with the remnants of a successful hunt. The hunting game ended in the premature death of an Arvicola terrestris or water vole. I thought it was a rat at first. It is rather big for something resembling a mouse. But apparently it is just that. A big mouse. I took a quick snap before Mouser started to nibble at rodent head.
Ratty is no more. The Wind In The Willows character was a water vole and not a rat. Hence the confusion.
Posted by Mrs B at 21:25