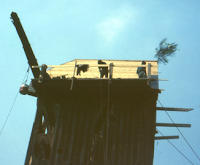 Something you don't see anymore: A tree on the top of the house when under construction.
As a kid I would frequently wonder why they would do that. It was explained away by telling me it was because they had reached the highest point of a building. It still did not satisfy me on the 'Why' this was done. How goofy is it to a child's rational mind to let a passer by know that you've reached the highest point of your construction by using something as abstract as placing a tree on top of a house? Very, to mine that was.
I tried to think of more rational explanations.
To me it was equally ridiculous to use something as a tree for a lightening rod.
I had never actually given this any more much thought later in life and into adulthood. Out of sight is out of mind.
Until I was looking at some old pictures of a restoration of a windmill done back in 1976. There are pictures of some foliage on the roof and on the rod of the mill.
But why a tree?
I found this clipping from that appeared in the New York Times on June 14, 1909. 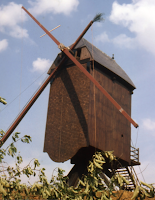 "They put the tree up because their forefathers believed that every tree had a spirit living in it. Every time a tree was cut down to build a house there was one more spirit homeless. Lest he should do some harm to the house or the workers they put a branch on the highest part of the building yet erected for him to live in. Lodged there he was supposed to be fooled or satisfied, and then once the roof was on he could do no more harm"

I know you're supposed to go 'aha'. But this clarification raises some practical issues yet again.
-How does the homeless spirit know where to look to find new lodgings?
-Does it have to be the same kind of tree?
-Why would putting on a roof stop spirits harming the house or the workers?
-The list is endless...

Anecdotal evidence from the past suggests that nearly a hundred years ago Canadian builders didn't have a clue.
Does the non appearance of trees on houses nowadays point to builders not believing anymore? Or have they just lost sight of the original meaning and found it pointless to carry on the tradition? I'm curious if there are still builders out there upholding the tradition.
Posted by Mrs B at 14:12

i believe the story is ture...i see this quite often...it's supposed to bring blessings onto the dwelling, or struture...