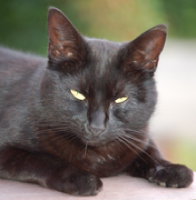 I woke up yesterday and Mouser was still fast asleep on top of the dresser. I went over for a little cuddle. Velvet Claws stirred and then I saw its poor little eye. He held it fast and it was all watery around the edges . It'd been indoors all night so if anything had happened it would have been just before Kitteh came in for the night and its eye had gotten worse during.
Rang the local vet, but he'd only be in after seven in the evening. That was too long a wait. I called round and found a vet in the nearby city and they were open for busines. Good. Mr Mole Slayer™ was out and about trimming his hedges and I asked him if he had a carrier case of some kind I could use. He didn't. Their dog barely fits in the boot of a car. I don't think they make carrier cases that big.
So now a problem stared me in the face: How do I get Mouser there? It's never been in a box, in a car or to a vet.
I had to prepare this very carefully. Cat was still asleep so I could slip into my clothes, get the car door, fold one of those removal boxes and get some heavy duty tape ready.
Getting the cat in the box was easy. He thought I wanted to play a game. Before Mouser could snap out of his amazement I folded down the sides and taped it shut. A few times. It didn't hold very well. Kitteh was not amused. I had laid down it's blanket, so it had something familiar smelling with it in the box, but that didn't seem to keep it calm.

He started clawing at the holes where you usually put your hands to carry the box. I could see some whiskers and claws poking out at times, poor thing was in a desperate struggle to break out of its cardboard prison.
I put the box on the passenger seat. Wails of terror arose. It was only a ten minute drive, but long enough for me and Mouser. On the drive over there the Escape From Alcatraz acts ensued, at one time it'd managed to sneak a paw out of the top of the box.
The very friendly doctor saw Mouser straight away. It was time to open Pandora's box. Mouser didn't budge. Cat looked up in amazement when the top was folded open.
Who was that?
Where am I?
Do I smell dog wee?
Why are my paws sweaty?
A drop of sedative in the eye, some yellow colouring, an observant vet: I'm afraid it's got a tear in its cornea.
Mouser didn't like the sound of that, nore the goo that was being rubbed into it.
She then went on to examine Kitteh. I don't know why Mouser looked so weird. Was it the eye drops or the sight of the rectal thermometer? Yearly inoculation. Velvet Claws was being very cooperative and didn't claw, hiss or bite. 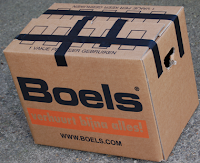 Mouser was lifted back in the box, we taped it shut and twenty minutes later I was back home releasing the poor little sod that had been whimpering from start to finish. Last leg of the journey it had been a bit quieter, I think it peed in the box, the blanket was a bit damp.
Kitteh didn't run away when I let it out, it kinda stared at me and at the garden, completely flabbergasted at seeing some familiar surroundings. But that was only the start of the real adventure! Oh yes! I still have to treat her for 10 to 14 days. Make sure it heals properly and it doesn't get worse. And how do I do that you may well ask?

Ointment. Yes. 4 times a day in the eye. Yes, In a CAT's eye, FOUR times a day.
We're at day two now, Mouser doesn't like it, but it's not having a go at me. Which is good. Yesterday evening Cat was on the bed, I gave it the pommage and it made some noise, but went back to sleep in the wink of an eye (geddit?).
Mouser had not left the vicinity of the house or garden all day, I think it's vision was a bit blurred and cat was still a bit shaken, not stirred, by the catnapping I had subjected it to earlier. Poor kitteh must have been knackered, it fell asleep the moment it had huddled itself in the firefox formation. I saw it breathe very hurriedly and move all of its velvety claws and whiskers as if it was still trapped inside the box in its dream.
Mouser seems ok today, it even brought me back a mouse in the evening. Hope all goes well and it heals up nicely.
Posted by Mrs B at 06:41