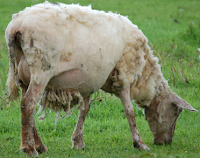 Neighbour's is still roaming around his bare patch of green pasture. It has lost a bit of wool here and there but only because it got entangled in some barbed wire a little while ago and it struggled to get free and in the process of doing so shedded some of its excess wool. But it made up for the loss by just growing some more.
Apparently Mr Amateur Farmer™ has had another stab at the shaving bit. I don't know if he was wearing a blindfold at the time, but a quick glance over the fence confirms this could well have been the modus operandi. We can now also see versions 2.0 and 3.0 running about.
On a non sheep note: I'm really glad he's got three daughters and not three sons. I dread to think what kind of brutal and horrible accidents might have taken place there if he had to explain and show them how to shave when hitting puberty.
Posted by Mrs B at 06:23