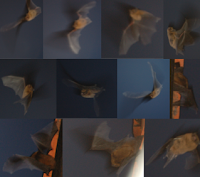 Not exactly red bats with teeth. More of a soft reddish-brown with a black snub nose. But I always think of the from if I think of bats. So I had to slip in the movie reference.

I couldn't sleep as the sun was just about to rise and I saw an awful lot of bats out and about when I looked out the window. There are at least five (that is the highest number of critters I managed to fit in 1 picture, but I'm sure there's a lot more of them. They don't exactly keep still to have their picture taken in mid flight. Mouser was outside too and saw them fluttering in the early dawn. Kitteh stared and looked puzzeled: "Flying mice? Whatever next?"

I made a small collage of some bats I managed to snap. Me thinkst they are all .
They are those small, dark shapes fluttering about around dusk all year round. They have a quick, rather jerky flight pattern that makes the bat's small size (3.5-5 cm and 27-30 cm wingspan) very obvious. So these are the guys you'll most probably see when you're washing down those nicely grilled sausages with a beer on the patio when the charcoal is already cooling down and the sun has just set but there is still enough light not to trip over the parasol stand.

My little garden book says:
Breeding takes place between August and November. A male has up to 10 females to breed with, but fertilization is put on hold until the following April. The female them gives birth to one youngster in June or July.

When Dr Livingstone gets back I want to go and have a look at the attic. Maybe we can see them hanging in the rafters or something while they're asleep.