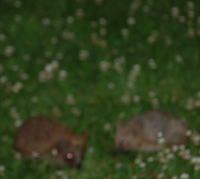 There was something in the garden making an awful lot of ruchus. It sounded like snorting, chirping, moaning, puffing, snuffling, bristling, grunting, whistling and buzzing all rolled into one. I went out to look what was making the noise. It was already pitch black outside, but I managed to distinguish some blobs on the grass.
After I am very pleased to announce:
The big dark blobs on the grass are actually two hedgehogs courting in the garden (hence the noises)! I managed to take a good picture of one, the other one scuttled away as soon as I tried to take another (it's probably camera shy).
Posted by Mrs B at 06:11